Despite the loss of Masters Scratch racing in 2018 on Tuesday Nights at Alpenrose Velodrome, spirits soared with a surprise visit from Five Time National Champion Zak Kovalcik who came out to see how we do, (and show us how it is done with a casual 36.47 in the 500m)

Kovalcik a long time bicycle messenger rose from the beginning ranks to reach the very highest levels of international racing. Famous for wild last minute,  come from behind chases, he is considered to be one of the gutsiest endurance track racers in America today. 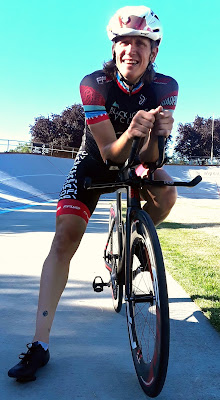 Out at the track on the Tuesday night, quiet night at Alpenrose Velodrome, Zak was the star of the show. Laughing so loud, one could hear his location up on the track wall, hidden in the porta potty, or even from way up in the parking lot. His charisma was firing up all sectors of the promotion.
He even stopped to help juniors fix their bikes!


Zak seemed to be thrilled to be back.  He was back where Coaches like Brian Abers had made a big difference in his life. Back at Alpenrose Velodrome, where Zak once set the unbroken  Ten Mile Track Record, in a  Scratch Race.

Posted by kidsofbike at 8:26 PM