In cycling, the word conjures visions of Lemond in a TT, Pantani attacking a climb, ONCE in Team Time Trial formation, etc. "Form" means position and motion on the bike, anticipation of the course, unseen recognition of teammates and competitors. Beyond this, it means how you live your life and reflect on other people (that last part a bit heavier though than I intended this post to be about).

Here's me in bad form: 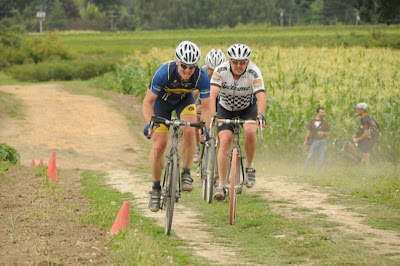 Straightish arms, hunched shoulders, jersey zipper is off-center. Basically I'm a form train wreck right here. This is pretty early on in the race also. I'd guess it's before the halfway point.

Now, lets look at the next picture: 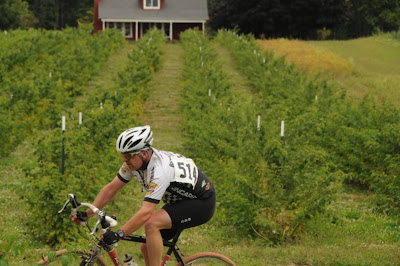 Bent arms, flat(ish) back, relaxed shoulders, probably even a centered zipper. Ironically, this is later in the race, when in theory I would be more tired and show less form. What's up with that?

One theory is that I did not warm up thoroughly enough, and the extremely hard first lap start of the race shocked my system and it took a little while to recover from it. Another theory is that I realized someone was taking photos so I made a conscious effort to look better. Not that I'm self conscious or anything...

I do know that with good form I am faster. In the first photo I was hanging on and trading pulls with the guy in front. In the second photo, I had dropped the two guys and was riding faster.

So there. In cyclocross, these issues of form are very important. Unlike the kermesse races, you will actually have to get off of the bike, and back on it while maintaining speed. You will have to adapt quickly to changing lines and ruts in the mud, sand, bark chips, etc. A tense upper body makes this very difficult. As the bike is being bounced around under you, a smooth pedal stroke and loose upper body is key to keeping your forward momentum.

To work on form, lets go out and ride our cyclocross (or road, or mountain) bikes in the grass, dirt, sand, gravel and mud. This can be done at any local park.

I hear some of you have newly acquired cyclocross bikes. Let's go out Thursday evening in SE Portland to practice the basics of dismounts/re-mounts, etc. How about Creston Park at SE 44th and Powell at 6:30 PM? Comment here, or e-mail me (Greg) to confirm.

Kermesse is upon us at Kruger's Farm

Regardless of the venue, the race presents all comers with a moment that transcends talk or intellectual speculation. When equipment decisions are revealed most evidently in their failure, and position in the pack is best established with an attitude, a race like the Krugers Kermesse stands alone.
Dry and dusty, rutted and bumpy this race is intended to wet the now voracious appetite of the Oregon Cyclocrosser. A discipline of bicycle racing that little old Portland, Oregon USA has come to lead the World in.
This event out on Sauvies Island was a faster  less technical version of the upcoming cyclocross courses. Rooted in Belgium, the old European Kermesses were typically on inner city cobbles in old industrial districts. The more granola Oregon version has more - you guessed it, dirt.
No strangers to the concept, certain likely suspects attacked the course. Greg O'brien finished 13th on the leaders lap - 8th in the Masters' 35years plus Event. In the Master Cs Csaba finished 12th and Fergus 21st in the 40man starter group. I think Dave may have finished 5th and needs to talk to OBRA.
On other teams Alex Accetta got 5th for "Team Beer" in the Master B's. Ryan Smith of Ironclad won the "Men's C's." Kevin Hulick of Gentle Lovers/Vanilla won the Senior Men. Good thing Eric Tonkin was at the Hill-Climb.
Posted by kidsofbike at 2:05 AM 2 comments: 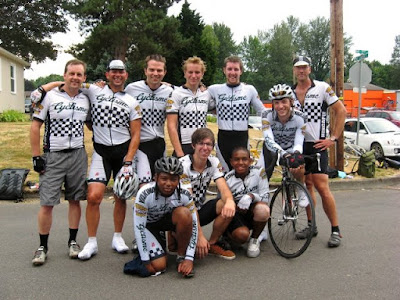 Benevolence, Good Form, Simplicity, and...
Greg and Fergus rode their bikes all the way out to Gresham from Portland before Fergus raced.
While not a vet of crits like Dave Wingard, no one watching Fergus go shoulder to shoulder at 40 miles and hour with 30 other guys would have thought his first crit was the day before.
Mr. Kinnel having started his whole racing career with Cyclisme and  Dey Shaun Lee in the halls of Matt Dishman Community Center just a few months before, is a marvel of bike riding improvement.
After the ride, Dave Wingard and Greg Obrien rode with Dey Shaun Lee and Naiqwaun Pellman back to Portland in the bike lane on Powell.
Posted by kidsofbike at 11:48 PM No comments:

Snaps and Kudos to everyone who got down and got back up again from the old swamp land and municipal airport that was Swan Island.
Everyone worked like a team. 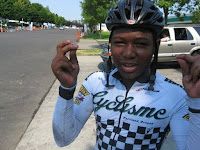 Alex won the Fives and got Catted up.
Trevor won a prime and got 4th in the Cat 4s. Danny Felts, Fergus Kinnel, Rob Hilderbrandt, Justin Serna, Justin Fisher, and Dave Wingard worked together like a team.
Posted by kidsofbike at 12:14 AM No comments:

American Cycling Lore
b.i.k.e. Board Member Bob Mionske, didn't change after he finished fourth in the Olympic Road Race. Nor did he change when Captain of the USA Cycling National Team and a young triathalon Natz Champ named Lance Armstrong was invited to join the team.
Bob was destined for the Law, and for the intellectual realm. His long running column in Velo News recently became a highly touted book about cycling legalities.
Once in a pizza break on a b.i.k.e. ride Bob gave a little talk about the Law for the Kids. When young Jammaal asked Bob about the interpretative balance used in adjudicating traffic law, Bob stopped cold. Jammal had this scenario of a cyclist going the wrong way just as a drunk person opens the car door into the cyclist, etc.
Bob's interest and spirit of debate possessed him.
Jammall and Bob went to a question and answer volley that lasted for three minutes easy. Both knights of adversarial council in each other's eyes by the end of the debate, for sure. The rest of the room sat stunned, or clapped.
We rolled out into the crisp fall air yacking energetically like ducks flying in a V.
It was just another rare life moment so common in the sphere of Cyclisme.
Posted by kidsofbike at 11:18 PM No comments: 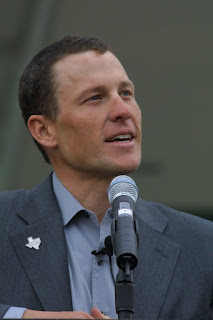 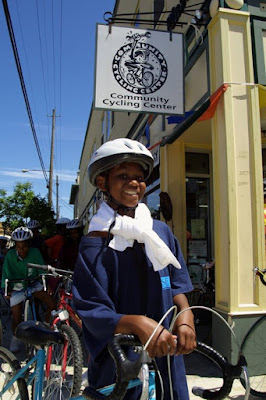 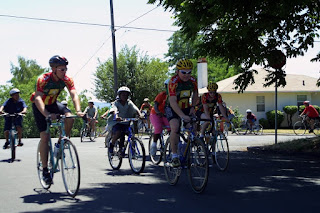 North Alberta, where Nissy works!
http://bikeportland.org/2008/08/05its-official-last-thursday-will-be-completely-car-free/
Not since Lance first Won the World Champs have we ever been so full of hope, and expectation!
Posted by kidsofbike at 1:16 AM No comments: