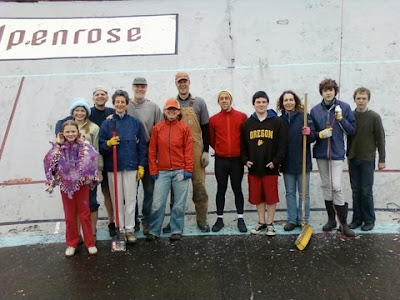 Our Juniors were commandos of clean as they rappelled from ropes down the face of the 43 degree cambered turn walls.

Whole families represented Cyclisme as the nicest "clean up crew" on the track during the 2011 Velodrome Clean Up Day.

"Your crew did pretty good out there today John."

Thanks Mike!
Posted by kidsofbike at 1:19 PM No comments:

It's about the bike! 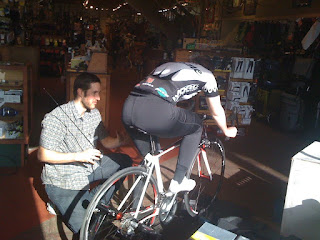 Shopping Jenn
Leonard was, for a new bicycle.
To do it she lived at River City for a day.

She rode on the road, all the brands,
for at least 20 minutes each.
She contemplated measurement and feel.
She contem 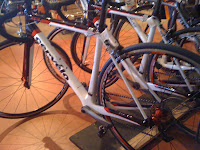 plated gruppos, pedals, cleats, shoes and saddle. She had them change the handlebars, saddle, and pedals.

She signed up for a year of fitting privileges with the River City Women's Fitting Specialists.
Ryan Weaver was at his best.

People came close to watch his procedures, and scurried back out of his way, as he moved near them to adjust the next thing on her bike.

She looks very fast. Look for her out on the road.
Posted by kidsofbike at 3:31 AM No comments: 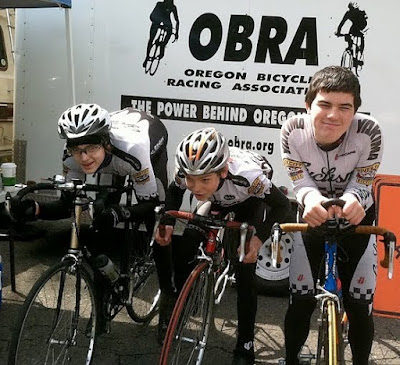 It's a Family Affair,
Story by
J.Fritzgerald B.
photos by
Greg O'Brien
when the Bossen family puts on a race.

Race Promoter Geri Bossen is a family woman. She builds cycling teams with a spirit of families first. Speeding by bicycle on the back logger's roads of the very neighborhood she lives in, is her idea of hospitality. Furthermore, her beautiful family provides all the concessions at race side.
She has fostered some of the fastest kids in Oregon Race herstory!

As a promoter,
She likes a family environment, and that is what she got from Cyclisme

Featuring some of the fastest cycling Cycisme families in recent memory, Word-RCB Time Trialed to the podium by

riding out East ten to twenty miles and that many back West again. It was a good day to bend one's elbows.

For starters, respendent in the blue and white colors of the shop team he is employed by, our brother in the Lore, Estaban Vazequez showed up ready to race in David Guettler's River City Bicycle Shop's kit. Dave participated in a partnership with Bicycles and Ideas for Kids' Empowerment's "Retail Training Course." Esteban was the class's star, and now enjoy's working and racing at the famous River City.
He also rolled out a 58.45!

Debuting their Swan Island legs, father and son Dallas and Clay Ry-Dick donned the black and white jersey of green and black lore, and tore the road up with 1:02 and 1:08 respectively. 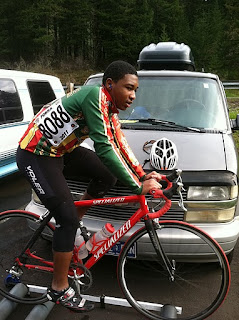 Dey Shaun Lee has been showing huge improvement both on the bike, and at the school room desk. He has been paying his dues too, with time at the Gregory Heights library and some scary time on the pavement at the Swan Island Tuesda

Always there quick, to pick Dey Shaun up, is Dey Shaun's Father Herman Lee. Herman drove Dey Shaun out this morning, where Dey Shaun threw down a very respectable 1:05.

Herman Lee drove Dey Shaun and Keegan O'Neil to the Icebreaker Criterium just the day before.before.
Keegan O'Neil and Kent Ross have been scaling Portland's Tualitan hills like mountain goats.
Keegan rode half the distance in 30 minutes, but Kent Ross turned in a very fast 58.25 for the whole 20mile course.
Cat 4 Senior Man, Greg O'Brien turned in the fastest Cyclisme Team Word-RCB Time today with a sub hour, 55:36 scoring him a 7th in the Cat 4 TT BAR.
Posted by kidsofbike at 9:41 PM No comments: 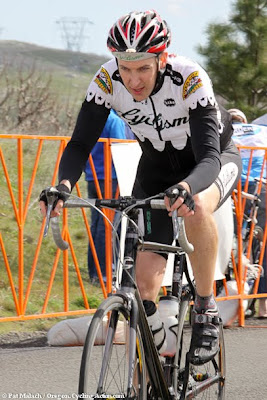 Despite
the
pomp and circumstance
of a
big stage race
by
J. Fritzgerald B.
Photo
by
Pat Malach
of
Oregon Cycling Action

Isaac Potoczny-Jones narrowed and kept his focus to not only ride the best race of his career, but to finish the whole four stage event - representing Word-RCB in the General Compilation.

Eating, cleaning and tending to other teammates is more difficult than it sounds at these events especially when RESTING is all you want to do.
Every single calorie is needed. After the Time Trial -before the Crit, if you can sleep even an hour, you recover so much you can feel it. But when you wake up, you need to turn all the systems back on, all the way on! Because you are about to race faster than you ever have in your life.
So you drink and stretch. Eat and do push - ups. Use the restroom and ride rollers. Hurry! it's time to head over there!
Held at night under the lights, the Cherry City Criterium in Old Town The Dalles was a dangerously fast tight criterium. Knowing the shape of things to come, Isaac shot from the start right up into 3rd position. From there he fought for his life. Speeds in the 30s mph, Isaac dove through bumpy tight corners, elbow to elbow with other racers. Slowly slipping as he fought, Isaac finished mid-pack and was elated to be alive.
And you ask about the Road Races? The Road Races. The road races were harder than anything on the standard OBRA schedule. Typically featuring over six thousand feet of climbing, hairy descents overlooking no guard rail and vast valleys below, even dirt roads on the climbs. The only thing tougher was the short Individual Time Trial held outside of Dufur in a wind field favored by alternative power vendors.
It changes a new racer.
We raised Isaac's saddle and flipped his stem. Take a look at him next time you see him and see if he doesn't look a little different, perhaps hardened by the Cherry Blossom Cycling Classic.
Posted by kidsofbike at 9:50 AM No comments:


East of the rain line. 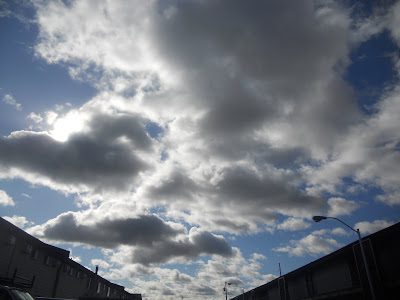 Featuring the Columbia Gorge, the Cherry Blossom Stage Race is a four race event promoted by Chad Sperry and his crew of famous promoters, including Cross Crusade's Brad Ross.

With thousands of feet of climbing and descending, and a peloton filled with teams from San Francisco to Seattle, and Idaho to Mexico, this event is the next step up in caliber from standard Portland area racing.

Our racers, across the board were new to the competitive level they were racing in, including our Cat 4's Sandra Clark, and Isaac Potoczny-Jones, and Jake Hansen in his first Cat 2 race at this event.


Winds blew in a permanent bluster carrying an underlying chill while the sun shined back an innocent warmth.

Travelling to another world of weather and another level of

everything in their racing. Rest, food, and warm up, all became 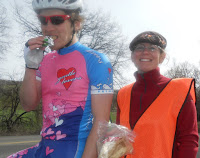 To warm up for the big race of the moment,
all the muscles
were activated 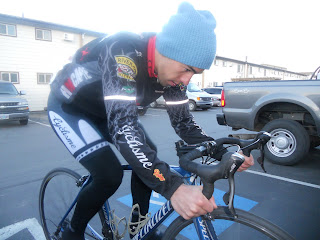 with yoga,
abs, and rollers.

While focus brought success, such as Jake's early 3rd place in the first road race, and Isaac's final lone overall finish for Cyclisme in the G.C. We mostly used the event to 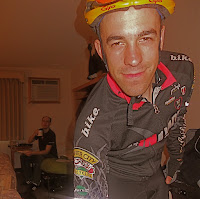 learn and get tougher.

Sandra and I volunteered and were part of the event's promotion.
Around our job we brought quality.
Sandra was key to making sure an under marked corner kept racers turning the right way safe. I heard radios squawk appreciation for her effort.
I was kind of asleep when key events transpired, but when I awoke, I got to work! - like feeding a bonked Stephen Beardsley or plucking an exhausted Jake Hansen off a climb.
Posted by kidsofbike at 3:55 PM No comments: