GB Cyclisme
If anyone notice's Splinter Wren calling us
"GB Cyclisme" it may be because '96 is when
he noticed a new team run by the old PSU director
sportif that was really beginning to shape
an identity for itself in
the Portland cycling scene.
It was an era when teams like GB Mobili, and GB Mapai were standing on all corners of European pro peloton's podiums. Our "GB" stood for  Grand and Benedicts. They were our sponsor then.
GB Cyclisme in 1996 was an era that produced The Mojo Squad of Lincoln High Juniors and Rocky Serna.
Characterized by team rides and low category development, this year we won the Cat 4 road champs with a team effort from Bill ___ and Pat Malach who terrorized the Cat 4 peloton with their trusty domestiques and some team tactics. One of those disciplined workers was a young crit racer named Justin Serna.
Portland was a different peloton then. Smaller, and maybe plagued by an old brand of elitism. Real team rides were rare and we were breaking some ground with slow pacelines.
PDX in '96 was a field fertile with opportunity for growth for seeds of benevolence, good form, simplicity, and team.
Posted by kidsofbike at 3:32 AM 4 comments: 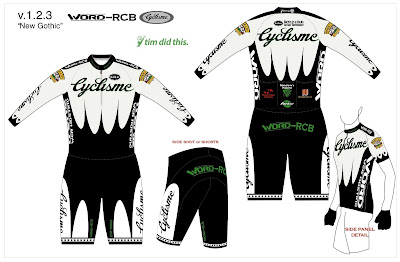 The star of the day was Alex Lightman, taking 2nd place in the men's cat 4's. Stephen Bedford had some hard luck in the 5's, dropping his chain at the final surge. Teammates Rob and Justin were able to try and pace him back to the field, but to no avail.

Juniors Dey Shaun and Naiqwan finished in the points in the Junior 13-15 year old group. These guys are getting stronger and better all of the time.

Fast man Randy Word finished 17th in the Men's cat 3 field, riding smart to stay away from a couple of crashes during that event.

All in all a good start to the racing season. I hear Stephen raced Sublime Sublimity road race, and cramped up near the finish, saying "The weather was nice, the course was very challenging, lots of hills, including one steep and long in the middle. The 4's and 5's raced together, so the pace was fast! I managed to stay with the front group until about 1.5 miles from the finish, where I experienced full leg cramping! I would have been passed by more people if there hadn't been a crash 2 miles from the finish. In retrospect, I needed about 500 more training miles to hang with a group like that, the output level was crazy!"

I hear you Stephen, as I've experienced the full blown leg cramp issue myself a few times. Next Sunday the Team Training Rides resume, with the next focus being for the crew racing at Piece Of Cake road race in Woodland WA.

Randy and Dave Wingard headed to the Jack Frost TT today at Vancouver Lake for an early season TT fitness test. I haven't heard how they did, so stay tuned for more details.

The MTB crew should start planning some group training for the upcoming Hornings MTB race. Maybe a Sunday ride to work on some climbing on the mountain bikes?

Pat Malach
Won for GB Cyclisme, the State Championship in the cat 4s, back in the day.
Now he is my old friend.
Since then, he has worked in big newspapers, little newspapers, Velo News, and more.
These days he is sportin a sexy blog called Oregon Cycling Action.
We're in it, take a look.
Posted by kidsofbike at 3:06 PM 1 comment:

Riding up through Zoo.

"Won't be using the Drops this winter," says Fergus.
A gift of old school wisdom was provided by new Cyclisme recruit and old Oregon Veteran bike racer John Ebenal as he showed us a path through the Zoo and into a hood filled with tennis courts and swimming pools.
Winding and climbing up through the changes led Frost to teach Glenn about "the inside" and other best practices for moving with a pack.
Check out Mr. Hilderbrandt's big spit.
Posted by kidsofbike at 5:02 PM 3 comments:

Riders ride
tighter
at special
paceline
and recovery
practice
Sunday February 1st.
Meeting in the cold winter fog, riders rendezvoused for a softer run. Flat lands and straight lines were the order of the day for this sub 30mile march.
Flat topography also flattened the measuring line on many people's EKG as the easier ride made for clearer minds. With all that extra intellect available, we visualized two different kinds of sprints. The little sudden crowd sprints, and the big long organized lead-out sprint.
A kilo long leadout revealed monstrous gaps on Hayden Meadow, and forebode doom for the opposition. If Cyclisme can recreate lead-outs like these in real races, then other teams will have to go very very fast to get around..
Ironically, many of the folks needing the tighter slower training in the formations, or looking for the recovery from the many Rockies Rabbit, didn't show up.
Posted by kidsofbike at 3:04 PM 2 comments: