The Master's Crew from Cross Crusade #4 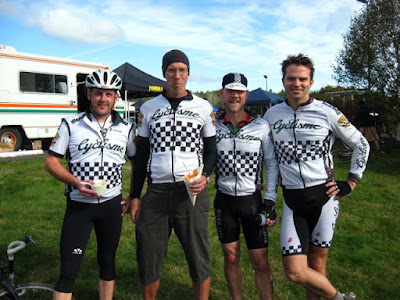 Me, Dave, Mike and Fergus with post-race nutrition on Saturday in Astoria. Good times.

Legend in the Lore 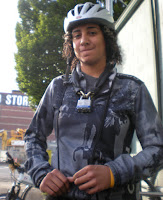 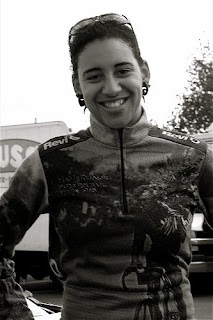 In a club that boasts hosting greats like Stacie Pieters, and Emily Thurston, Nissy Cobb is right on their wheel.
While Cyclisme Racing Programs have certainly seen some great bicycle riding women roll though, probably the best junior women was the b.i.k.e. program's Ms. Anissa "Nissy" Cobb.
A multi-time Junior State Champ in road, crit, track and cross, she has taken up Mt. Bike racing of late.
Once back in 2004 at Cyclocross Nationals she jumped off the line so fast she nearly dropped the hundred plus women's pack by the first corner and she carried it into the first hill, finishing 10th on the day in the Women's Bs.
An excellent track racer, she still races at Alpenrose and is moving up the Oregon Cat 2/3 Peloton's BAR.
Meanwhile, she is often seen serving the community. Lately it has been up on Alberta Street at Community Cycling Center.
Posted by kidsofbike at 11:42 PM 1 comment: 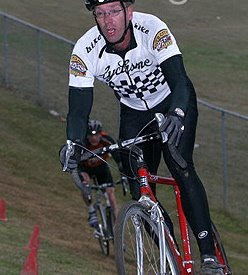 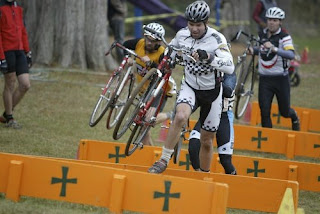 Radical
Marauders
Manage
Money
Muse
and Marry
but on the Rainer High School cyclocross course
in NW Oregon Sunday,
they climbed and descended.
Fergus Kinnell wrote:
I had a great race.
I was just coming out of having a head cold, so my expectations were low. I can't remember what I had for breakfast, but whatever it was, I will try to have it again.
I passed many people and felt fast. I began to know I was going to lap the field.
Then I climbed out of the van.
I usually feel tired the day after. Not this time. I felt good all day!
Posted by kidsofbike at 10:57 AM 1 comment:

Meet at the area in front of Paccini's Restaurant - the Vue it is
called, on SW Montgomery off Park Ave. amidst PSU. There is a Subway and a
Starbucks.

JB:
"Those who participate, will take some time to steer this bicycle team.

Let's enthusiastically engage agenda development so those who can't
attend, can participate."

On the agenda so far:

Chime in on the comments here with other agenda items you may have.

Greg
Posted by kidsofbike at 8:50 AM No comments: 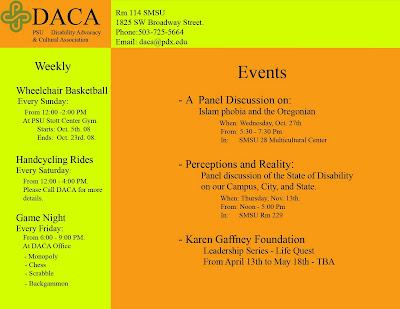 How we reach out to the community is part of the way we race.
Disability Advocacy and Cultural Association is just one way Cyclisme is involved in a community that many other teams overlook.
Please take a look at the flyer attached and perhaps take the time to get involved. Especially note the "Perceptions and Reality" on November 13th because it has free food!
Thanks!
Posted by kidsofbike at 8:03 PM No comments: 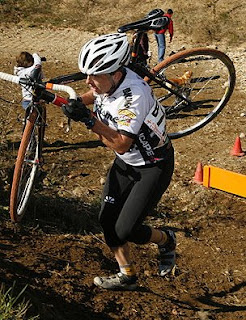 Greg Jeff
Posted by kidsofbike at 12:31 PM No comments:

Cross Crusade #2 at Villebois, by Greg

Jeff joined me, Deirdre, Abigail and Danny to drive down to the Villeboise race. I had a new pre-race strategy to test: no coffee in the morning (Abigail was in awe of this, as she's never seen me go a morning without coffee). She actually smiled and busted out a "no possible way" on me. But, I think I heard that all of the wonderful benefits of caffeine begin about 30 minutes after consumption and only last about an hour and a half. So I planned to caffeinate 30-45 minutes before go time.

I managed to drive without caffeine just fine, and we pulled into the "designated" parking area of brand new side streets amongst empty housing lots at about 9:20. Jeff and I put on our shoes and helmets to go hit the sign-in and try and pre-ride a lap or two. As we rode up, I found that we could actually park much closer to the course, so we ended up moving the van (twice), until we were practically course-side at the first turn (descent transition right hander from asphalt to gravel). We saw Csaba during our van moving session.

Pre-riding is getting tough, as there are so many racers. Jeff and I, along with a few Tireless Velo guys hung out at the first corner until the beginners started coming in to end their race, and we were off on our practice lap. We made it mostly around the course, and found it to be a pretty mountain bikey type course. 2 paved sections, one flat gravel section, some bumpy grass, and some bumpy dirt with wide areas for passing and at least 2 or 3 decent lines through before it narrowed again. There were a few sharp turns on gravel that had to be taken carefully or you'd wash out and hit some painful big gravel (1"-2" chunks).

After the C race we tried to ride another lap, but were kicked off the course with stern "no pre-riding" warnings. I hear they started taking numbers and doling out punishment in the form of 30 second later starts for those who blatantly pre-rode when they were warned against it.

We watched Csaba start his race, then I coffeed up and Jeff and I headed out on the road for a short warm-up, and we saw Trevor and Alex arrive. We wished them well as they set off to register, then headed on our warm-up with the intention of getting to the start 30 minutes prior to race time to get a front row slot. Foiled again, as we ended up in a loose 3rd row, but slid into 2nd row prior to the start of the race. While waiting, I saw Csaba had switched from his road/cross bike to his MTB. Csaba, care to fill us in on your race?

I got a good start, with no clip-in issues this time at the start (I took the Dremel to my shoes some more, to ensure no pedal/cleat interference). I rode the first lap taking extra care to find good lines and ride clean, and used the pre-ride knowledge to rapid pass a few folk. I made up spots each lap, and only gave away a couple. One was on the last lap to Team Beer's (former PSU Team racer) Alex Accetta.

There were great races-within-the-race, two I lost (Alex and a Guiness racer), and a few I won. I felt strong, and the course suited me well. Todays revised results have me at 12th.

We cooled off, and watched the start of the B's race and had some fun screaming and yelling. It was nice to see Trevor and Alex in the same field, and Alex in his first cross race. The B field is pretty intense and I think you'll see both Alex and Trevor show fast improvement in their technical skills, which are already pretty good. We headed back to Portland before their race ended, but hopefully we'll get a race report.

All in all this was a good race day. I'm really hoping for some serious mud races soon, but I must admit that it's nice to be all cleaned up within an hour after a race like Sunday.

Greg
Posted by kidsofbike at 9:56 AM No comments: 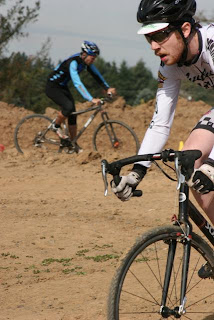 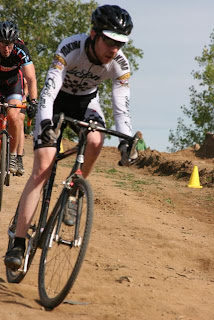 Never has he not raced cyclocross anymore.
Posted by kidsofbike at 11:00 PM 1 comment: 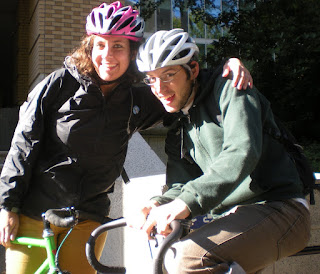 Young Architects ride their bicycles to areas where architecture happens.
Riding from the Millar Library to the East Burnside corridor, young architecture students use bicycles to discover higher learning.
Posted by kidsofbike at 11:26 PM No comments: 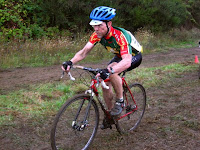 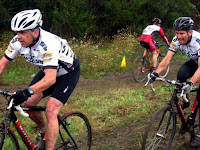 Rain made slick mud slicker
at the first big
Crusade event
of the Fall.
Many racers
fell in the slick mud
as crowds bigger than ever,
on and off the course
descended on the Alpenrose Dairy
of Shattuck road.
Photos by Fergus
Posted by kidsofbike at 11:49 PM 2 comments: 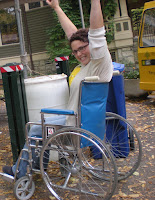 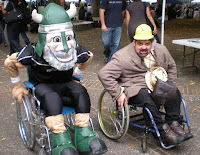 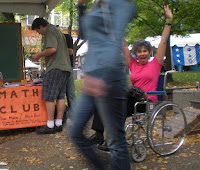 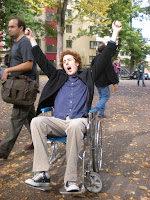 "Party in the Park"
DACA presents wheelchair racing to PSU 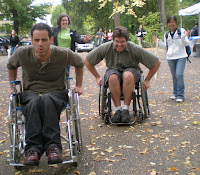 Posted by kidsofbike at 9:52 PM No comments: 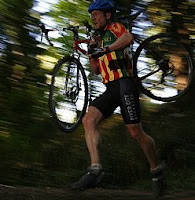 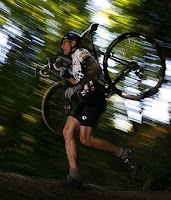 Cyclocrossers got to run fast.
There is no away around the running. Some people run more than others, but running is part of the game no matter what.
Everyone needs to practice running 40 yard sprints during the week if they want to be competitive.
Posted by kidsofbike at 11:18 PM No comments: 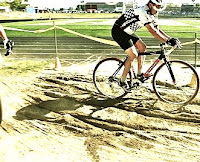 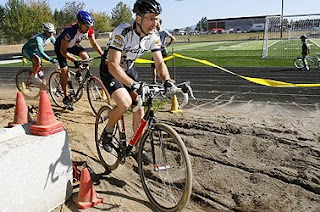 It is not easy to find your way safely on a Cross course.
Posted by kidsofbike at 11:08 PM 1 comment: