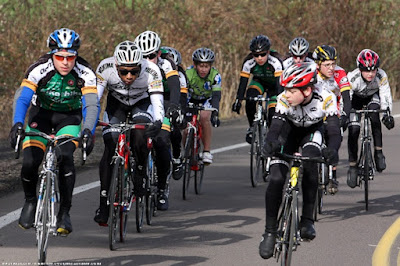 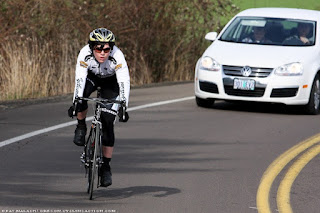 hotfootphoto.com
&
Pat Malach
Our Juniors launched a paceline from the roll-out, and sent attack after attack.
Sending the ultra energetic OBRA Overall super nova, Keegan O'Neill, Cyclisme Juniors blocked up the pack and got Keegan EIGHT MINUTES off the front.

Marking the lead out vehicle, Word-RCB jumped like Jake.

down. Then Keegan towed the pack around and strung it out,

wheel to to wheel hot.

Finally, about five miles out, the pack's endurance broke, and Keegan was away. Kent immediately justified their lack of resolve with slow pedal strokes at the front. Dey Shaun and Noah obliged to pull through as if the effort was official, even if absurdly slow.

For over a half hour, the pack acquiesced to dawdling. Every once in a while, one person might feign an attack, but could not get anything to coalesce.

"If any one jumped, I knew they were going to see me on their wheel," Dey Shaun Lee said of his blocking strategy.

When nearly 18miles had been covered, BBC led others in a flurry of attacks. The flurry was so violent, tired from his early work blocking, Noah Beggs found himself suddenly 100 meters off the back.

n stuck to the lead BBC attackers and Kent helped him regain control of the pack. They slowed it down enough for Noah to chase back on, but not for twenty minutes.

Coming into the final climbs, attacks came thick and fast, and our guys were on every one. When the fastest came to the final, and most steep hill, Kent from the front all the way and won.

Kent is in an older division, so he finished First, as well. Noah got 3rd in Keegan's division, and Dey Shaun got 5th in Kent's division 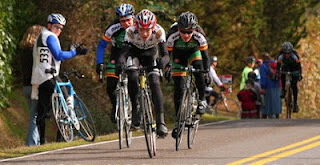 despite throwing his chain in the sprint.

During yoga back in the parking lot afterwards, everyone was bone tired, but had good things to say about each other, and their Team Effort.