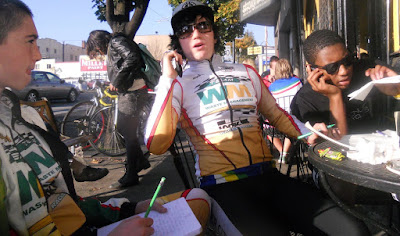 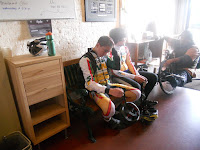 Rolling with the big dogs,
I learned slang, and saw sights.
We came together in a natural way at PastaWorks, by accident as
Sandwich Shoppers

found Bergmanns by the baguettes. 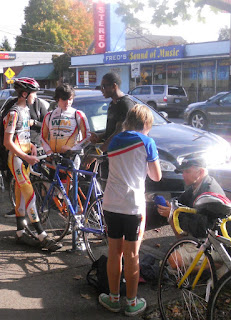 Keegan stood front and center with Noah in the middle of the sidewalk in their new Waste Management outfits, while Jake, Deyshaun and Marquel scooped hummus from a plastic cup. I said hello to babies in carriages who looked at me eye to eye with a wide wondering stare.

Hawthorne Boulevard is a show on sunny days.

After a long period of preparation, we rolled out carefully like a ship out of it's slip. We put teenage blockers at the front, Maya in the middle then me then Jake. Pedestrians, musicians, cars and potholes rushed up in such a cacophonous spirit, I didn't think we would make a draft. 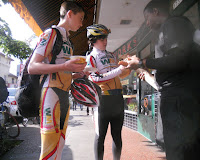 Yet with two new Junior candidates on the ride, and a return effort from a lost member of The Lore, new captains showed their resiliency.

Keegan and Dey Shaun did the lions share of the work pulling me, while we used Noah up. He cracked only late on the way home.
Maya and Marquel just tend to their own momentum individually.

Over the years, I have never understood why more adul

ts don't attend these kids rides.
They are wonderful. They are silly. Even slow, with intermittent bouts of sheer intensity, they tire everyone out.

We stood in the sun amidst a crowd, ran slippery slopes in Laurelhurst, then bareled down s 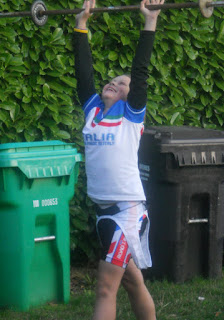 tark.
After coffee at Crank, it was coffee at River City, then more sun on Grand in front of Nicholas's.

Over pizza and veggy mezzas youth writing for "yes, I can write" plied their new trade.
All sorts of journals were on display. Writing skills were also beginning to show more muscle as the paragraphs poured out.

Lined out pushing back up Pine, we were a site to see on the road.

You can see our team being something different next year.
Possibly a 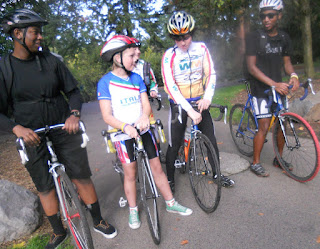 smaller team with even more alacrity.

Wouldn't that be a hoot?!
Posted by kidsofbike at 4:14 PM No comments: 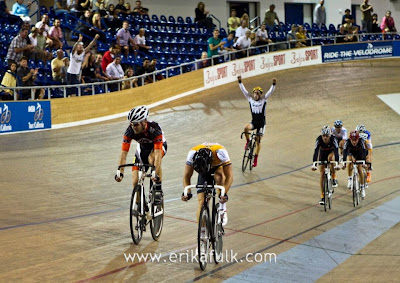 Hansen and Holt Lap the field in the Points Race National Championship 2011.
Posted by kidsofbike at 10:47 PM No comments:

People who made it happen!

To get one to the Glory-Drome it took a village of caring, talent sharing, and check writing souls.

All of you did so much! And some of you really carried the weight of the task. 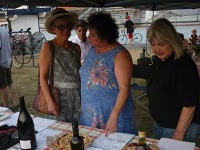 A special gift from the Cadonau family could not have been realized without the incredible work of Marilee Tilstrom at the fundraiser dinner. You all

backing her up made the event sing. 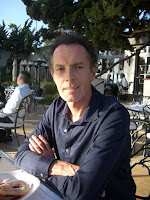 combined with the critical major loan and gifts of David Guettler did what really few others could do, but what was so essential.

All throughout the effort to c 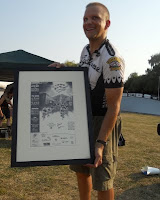 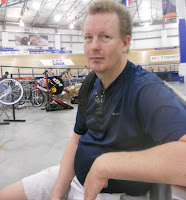 ommunicate our need, Board Chair Tim Bergmann and his pal Pete Kirby made things happen. Then furthermore, while we were down there Bergmann

watched over my house and deposited checks, while Pete literally followed us down there and made sure we were fed and funded.
Pete introduced us to his sister Holly who sat us down with the DEW foundation.

Once down in Carson blessings abounded as David Pulliam, Raja Black and the Major Motion crew kept us on a magic carpet of knowledge and logistical 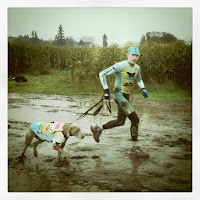 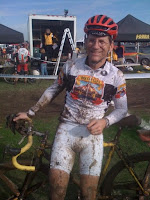 athlete who "get's it" 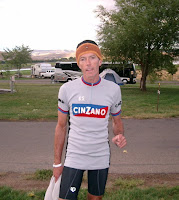 and despite a raging head cold, and still winning medals, Lana Atchley donated to the girls of b.i.k.e. a veritable cornicopia of expensive race clothing. I mean a duffle back of top end women's cycle wear.

Only one of the many smaller bags is pictured here. 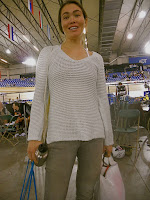 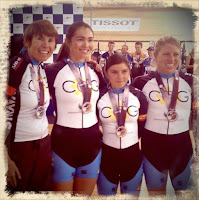 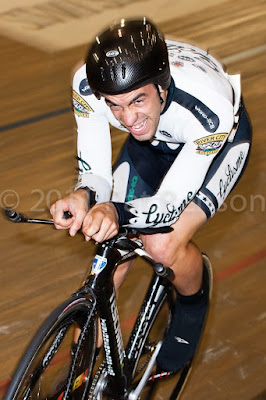 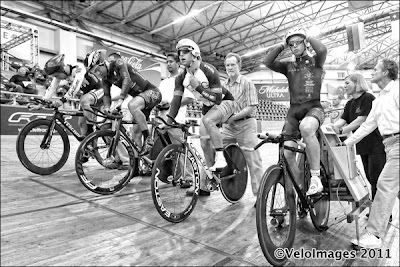 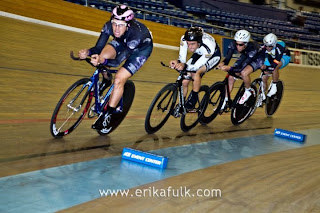 Play by Play in L.A.
by
J.Fritzgerald B.
Photos
by
Pat Benson,
Erika Fulk,
and
VeloImages

Arriving on the 24th Jake could sharpen his teeth on the wooden track in the "NATIONALS PREP RACE" featuring more than a few National Medalists. Racing on the steep wooden banks of the Home
Depot, ADT Sports Center was key.

Aclimating in an omnium consisting of a Points Race, a Miss and Out, and a Scratch, Jake took it to 'em from the start.
Lapping the field, in the points race, Jake said "Hello!" Then in the Miss and Out, he held until the final 3 but then was the first to go. Finally in the scratch race, he sat in until a heroic flight. With three to go he made a quick solo dash to catch a previous break that he all but caught just as the field caught both of them. Four guys rolled by him in those last 10 meters and Jake got 6th.

The night added up to 2nd place overall at "The Prep" and Jake won $60!
We were encouraged! 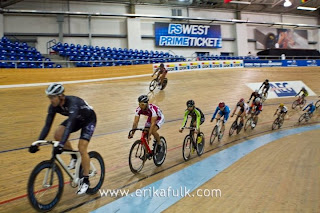 The following two days were mainly about rest, but transporting items one bike load at a time to the infield or practicing with his Team Pursuit Team for an hour kept him loose on the track. Our hotel was a few thousand yards around the corner in a warm climate. It was mellow.

The first day of the ELITE NATIONAL TRACK CHAMPIONSHIP Omnium began with the Flying Lap. With the flying lap began the bad news. We just didn't seem very fast at this year's event. All the work seemed to be not paying off. 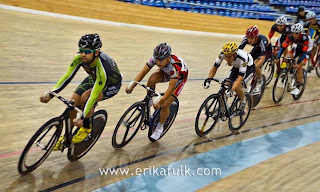 As the Omnium events passed, so did one opportunity after another to do well in the multi event part of NATIONALS. Finally, "Double D" the mechanic showed up, having just driven down from Portland, he laid hands on the bike and discovered the problem: a cone bearing had cinched down and become too tight to even be made turn by hand.

We were all shocked. We looked around at each other aghast.

After fixing it, Double D carried Jake's bike up to the start of the Team Pursuit with Austin Carroll, Al Urbanski, and Zak Kavolc 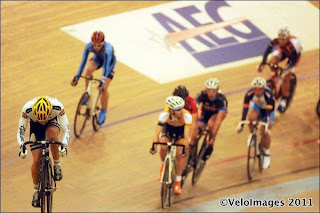 53 Kilometres per hours
is equivalent to
32.9 miles per hour.

This bit of success combined with the "cone discovery" was just enough good news to send Jake proudly into the Points Race Qualifier/Final progression. And in both races he finished 2nd! But in the Final he finished 2nd by lapping the field with defending Point Race National Champ, Dan Holt.

When they caught the back of the pack,

Jake crossed the line first for 5 points, and threw his fists in the air.

"I actually thought I had won," Jake said after.

Sunday Afternoon, the next day, the Madison with Al Ur 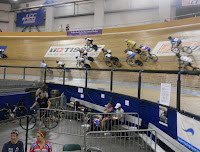 Nobody felt too bad about that.

Two medals, a full schedule of racing, and a few technical mistakes later, Jake was sure he was a stronger, smarter bicycle racer than the year before. Now with some key connections and a bigger resume, Jake is looking for a shot with the pros.
Posted by kidsofbike at 8:40 PM No comments: 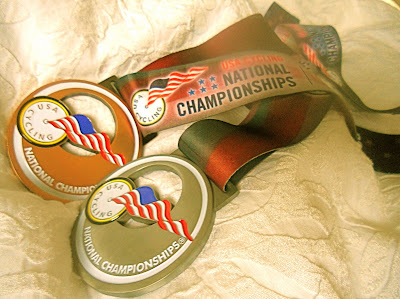 Jake won Bronze in the Team Pursuit
and
Silver in the Points Race after lapping the field.
Posted by kidsofbike at 1:07 PM 3 comments: