Defending his lead in the Oregon Cup Jake Hansen is seen in this video on his way to a fifth place finish on the Red Hot Volcano of Fun, Mt. Tabor, behind the win of the great John Leonard. Jake's fifth kept the Oregon Cup Leader's Jersey on his back - where it has been all season.

Funny reparte' at the beginning of the video features Pat Malach who once won an Oregon Cat. 4 Road Race Championship in his Cyclisme Jersey. Video Credit: Kenji Sugahara

Posted by kidsofbike at 12:04 PM No comments:

A recipe for success, 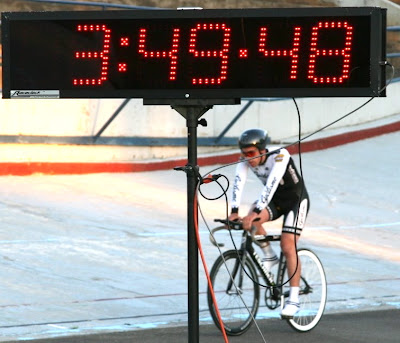 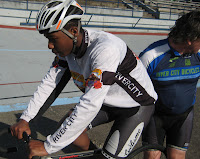 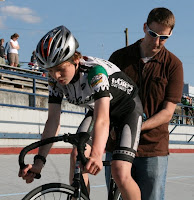 In a bowl!
photos by
Dave Roth

Word-RCB thrilled all in attendance at the Thursday N

ight track races at Alpenrose. Jake Hansen and the Juniors he coaches are an understood reason for the attention.

The whole story of course, is in the family of racing mentors who surround Jake and the Juniors, and the underlying Ken Nowakowski school of Pursuit.

While our juniors still stand lower on the podium than the kids from the venerable Beaverton Bicycle Club, they are pursuing them with a hungry zeal. And people see it. 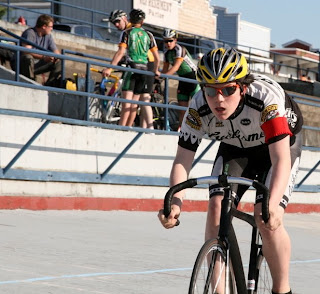 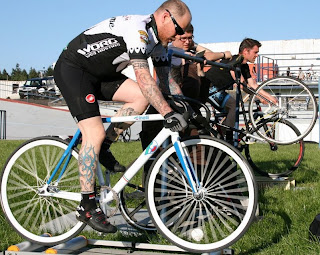 Certainly Charlie Warner, the race promoter sees whats going on. Charlie is Mike Murray's right hand man at the velodrome and he appreciates the new class on the infield of the concrete maintenance nightmare they work so hard on.

Charlie holds up new young starters like Kent Ross and sends them into a career of success - and he remembers why he works so hard!

Kent and Keegan are so fired up, and Dey Shaun and Naiqwan are just good at it. Naiqwan is the Cat 5 2010 Bronze medalist in the Match Sprint. 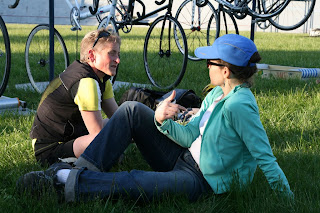 With food and familiar faces, their spot on the infield is a welcoming place to play and talk. Big props to the Ross Bernardinis for their fresh baked ways.
Other team's racers
gather around to dig the cool part.

Mom supports the kids. Dietician supports mom. Coach supports the dietician. Domestiques support the Coach. Everyone supports the Star. The Star informs and leads everyone.

It's a good system.


By the end of the evening's schedule
Jake Hansen steps up and gives a demonstration that puts all on the edge of their seats. 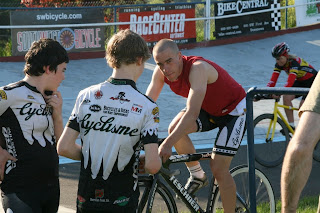 Posted by kidsofbike at 9:06 AM No comments: 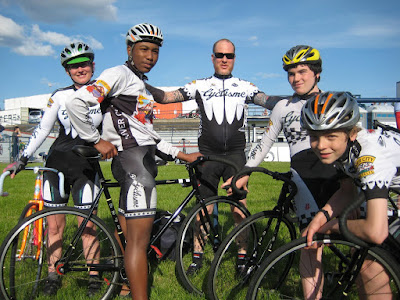 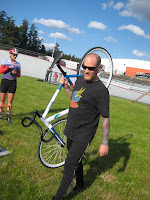 To the trained eye searching, a barren empty concrete bowl fills with meaning. People surround and enter the bowl in a sacred display of all life in miniature. Social nature finds symbolic reflection in the simplicity of banked walls, an easy rolling flat "apron," and a soft grassy yard called "the infield." Simply riding hard alone in one direction becomes a Pursuit. 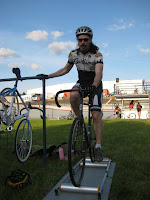 enlightenment in their dance with the temporary. It's Hilarious, and it's exciting.

Cyclisme racers gather at a bar where only we hang out. Jake placed the bars location near the back straightaway, and it was suddenly everybody's bag around the plywood roller foundations folks warmed up on.

Our beloved Tillstrom Family presented a member of the original Mojo Squad of GB Cyclisme that came up to build the Kids of b.i.k.e back in '95, Nils Tillstrom and his father Keith. Nils back home after years of working on Capitol Hill in Washington DC, he finally has a moment in Life to race his bike again. 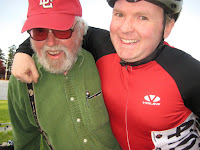 Thursday Night Pursuits was a smart place to start.

We can judge by the company we keep there. One luminary face that thrills me is Oliver "Butch" Martin. A young Black Italian in 1967 knew cycling and red sauce, and he knew racism. When he brought that soul of Harlem (see here), to the USCF as National 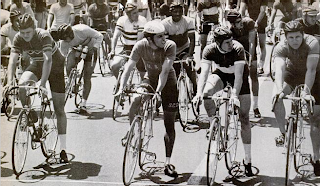 Team Coach in the 1970s, he brought a style to the top unparalleled in in American Cycling history.

Tonight he stands on the infield speaking Italian to me. Interrupted by Colby Wait Moleneux (fasted TT new kid in Oregon)he suddenly pours all of his attention to the possibility of adjusting a bolt, then turns to me and resumes, "allora, questo giorno e'..." as if he 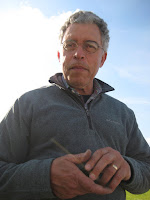 had just cut the line to a fish too small to keep. Smiling, he told me about what time it really was in the Seventies. Working with Muhamed Ali in the Cycling Tennis Camp of late Seventies Harlem, Butch Martin is SOLID.


He brings all power to his people and they beat all people in tonight's 3K Pursuit, but Jake. At Cherry Blossom in the biggest wind yet, Colby destroyed the Northwest's whole peloton with shock and awe.

Those Ali sponsored camps in the 1970's are where Ronnie Vails introduced his little brother Nelson Vails. Ronnie's son Emerson raced with Cyclisme in the 90s. Ronnie hosted a brunch put on by Cyclisme in 1999. Nelson came to camp by Cyclisme in 2002. 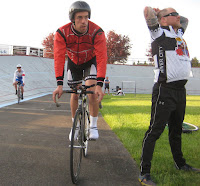 Life! And the interconnectedness the Lore provides. Our team's Lore connects to other team's lore and we have history.


Suddenly Dey Shaun Lee is getting a huge advantage on Kent Ross. Kent the new phenom, had only ridden a track bike maybe forty five minutes ago. Dey Shaun's new found sprint ability is founded on years of experience. Looking back concerned, Kent squeezes a little more speed out of his legs. Kent's months of training this winter slowly pulled back the advantage. Boys becoming 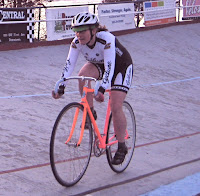 young men tried as hard as they could, then flopped down on the infield in complete exhaustion.

Captain Hansen awarded all the Juniors "Road I.D." socks for their hard work. Jake earned them earlier in the day acting in Bob Mionskie's new film short coming out soon.

Fresh from teaching kids how easy gardening is out in Parkrose, Sandra Clark used an easy gear to pluck Victory like a rose. She was seemingly caught by the BBC Pursuer, then her easy gear spinning like a sewing machine reeled in

Alpenrose Velodrome is amazing. There, after a long day of life, people

come to perform a Play where life is condensed into the bottom of a bowl.
Posted by kidsofbike at 1:50 PM No comments: