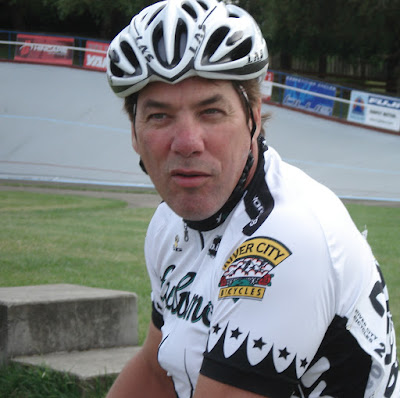 Chip and I as kids...
Growing up in my old neighborhood Chip Ross was one of like, twenty guys named "Chip." I counted all of them as my  friends during that era, some of the best years of my life. So you can guess, having a Chip off the old block is really great.

Ross is no island.
A team builder, he encourages everyone else by just trying something new.

In the Fall he started going a new direction with his cycling and last Tuesday night at Alpenrose it really paid off.
"I have always thought of racing track, then a little birdie said 'buy a track bike' and I was hooked."
Chip Ross who raced for Cyclisme back when resteruanter Jon Beckel sponsored the Green and Black with his Montage Restaurant, Chip came back to the Team just in time to attend our Spring track practices.
Now finally racing, Tuesday night, he swooped into 2nd place with a solo Bazooka at the whistle so fast that only famous Darell Provencher of the Rose City Wheelmen could beat him.
Posted by kidsofbike at 6:27 PM No comments:

Confluence of a Cyclisme 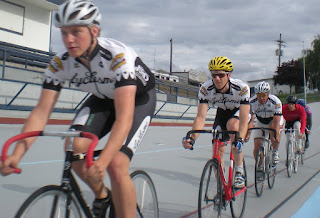 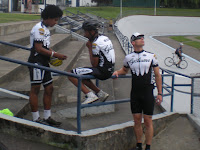 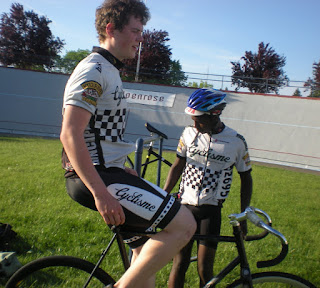 Teams form within disciplines and our athletes reveal their abilities in every sort of OBRA event.
All the fundamentals
are in place.

Teams are
now finding
their
best form on the track, in road races, and on the short track.
See it in a new group
of category 5 Track guys
within  Aubery, Cameron, Dishes, Rob, being ,  reinforced by Chip Ross, Fergus Kinnel, and Dave Wingard as they introduce Juniors Lee and Pellman.
See it
in the Monday Night Short track contingent led by Greg O'Brien
charging hard for lofty goals.
Volcano busters Jake Hansen, Mike Mann, big Dave Wingard, and Stephen Bedford climb Tabor weekly.
Wingard, Word, and Kinnel enrich the lives of youth while discovering the velodrome themselves on Tuesday Nights
at Alpenrose in the Velodrome bowl.
Young Juniors  groomed on Portland streets this winter by a plethora of mentors including Dana Golden, and Greg O'Brien. Aubery, Cameron, Jake and Bedford did a lion's share as well; instilling base fitness before trips to Mountain bike territory in the cars of the Mt. Bike guys changed the life of Naiqwan "Angel' Pellman.
Jake, Alex, and Bedford in the 4s on the Track. Word and Deardorf are 3s. O'Brien scores in the short track Master's 1s.
If a few missing faces add to our ranks where they can, we will have a perfect storm.
Crit season is next.
Posted by kidsofbike at 9:08 PM No comments: 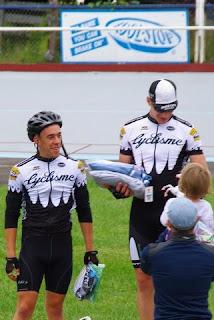 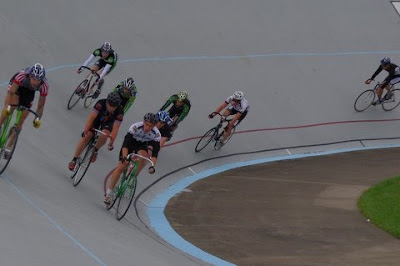 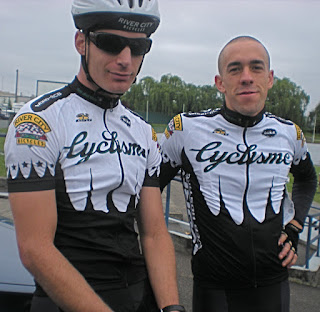 These
were
the
words
that flashed
in the minds
of
a lively crowd
as they
watched our
pugnacious pair perpetrate
a
rapacious "bunch-slap"
of a few boys who certainly must
now fall back onto a life of sorrowful introspection or worse...
alcoholism.
So disruptive and disturbing
was the intensity of the "Bazooka"
Cyclisme threw down
at the start,
that many were forced to hide their eyes or gnash their teeth.
At the whistle ending the neutral lap Jake launched on Glen's Mercier over the top of the first Alpenrose sign and down the back straight, Bedford on his wheel. Jake arrived at the 3rd corner, exchanged the lead, then fell back to block.
The pack fell for it for a lap.
Then when the guys from U of O tried to get things going a new direction,
Jake gave them an education.
No one could get away from him, and if they went up track to exchange, so did Jake.
If they got on his wheel he went slow.
If they jumped fast, Jake matched them, forcing them to stay high while going fast.(very tiring)
If they slowly tried to set up high, Jake joined them up there.
Time and time again Jake Hanson found ways to discourage the pursuit of Bedford's lone breakaway.
Bedford just kept hammering, off the front.
"Sometime I felt like I was going so slow, but I would look back and they were still a half lap back," said Bedford.
It was Jake's blocking combined with Bedford's speed that allowed Bedford to lap not just the Category 5's, but after Candy Murray catted them up, THEY DID IT AGAIN IN THE FOURS!!!
Bedford took the wins with elegant calm, but the crowd favorite was Jake Hanson.
As Bedford made his boldly singular quest to lap the field, Hanson was all over the track like a quarrelsome Blue-Jay protecting a nest.
Ironically, he was better at it in the second race with Fours than he was in the Fives race before, and he shut them down in that.
"I am quite impressed with these new young riders from Word-RCB today!" blared Luciano Bailey's voice over the velo-com.
Posted by kidsofbike at 7:01 PM 2 comments: 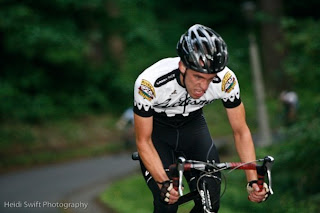 Racing in his first year as a Category 3 racer, Jake Hanson charged to the podium and finished 3rd on Stumptown's hardest crit.
Jumping early, he worked with old training partners from RCB and PSU to deconstruct the peloton.
Following his broken collar bone earlier in the season, Hanson was a little bit frustrated with his results and was getting ancy. While he has had some success this year, for him, Tabor was a much more important goal.
"I have had some success this year, but for me Tabor was much more important goal," said Jake.
Jake credits his team for his success in his recent treatise on winning at Mt Tabor: "Lava Love x 3."
Posted by kidsofbike at 8:44 AM No comments: 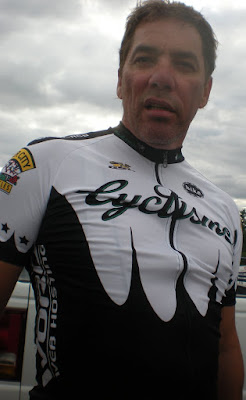 Team Picture?
With so many different disciplines in the Cyclisme program, different groups train at different times.
The Roadies got a break last week when the Sunday ride played host to some formational photography.
Though hard, even agonizing for some, it was a hoot for the rest of us.
Word-RCB will try again at the regularly scheduled track practice, and see how it goes.
Posted by kidsofbike at 3:30 PM No comments:

Who will defend Gotham? 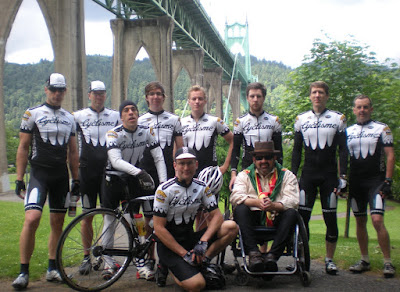 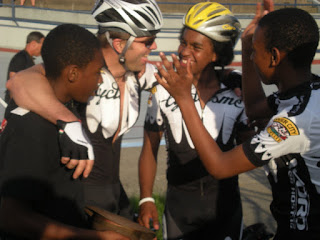 Masters and Juniors started the track season with the easiest individual track events on Tuesday nights. 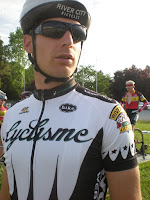 Cyclisme got cool new uniforms.
People posed a lot.
They supported each other. 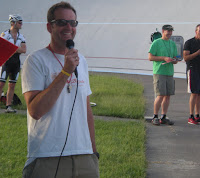 They did the kilo and the 500m depending on their age.
Everyone scored.
The announcer dug the word "Word." 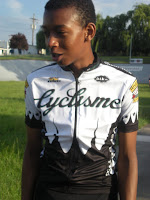 A nexus of two groups -young and old. 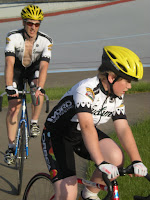 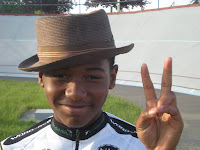 Photos by "Dishes"
Posted by kidsofbike at 7:16 PM 1 comment: 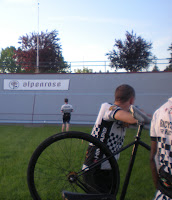 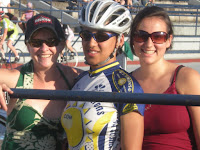 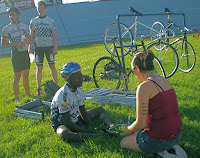 Friday night means racing for the velo friendly Fives and those qualified to Match Sprint.
Friday is the night that features the big-time
recovery demanding "Match Sprint." 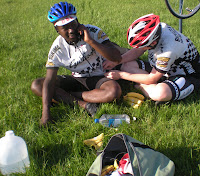 Deardorf is the only Cyclisme racer qualified for the latter.
Cyclisme Lore's Nissy Cobb is also qualified and goes head to head with men and beats them.
Respendent in a skinsuit she got back when she trained with the Kids of b.i.k.e., Ms. Cobb also brought in her entourage, the famous mentor and Sister in the Lore, Jen Brinkman, along with Jen's roommate Rose.
These women have Nissy's back and were a big help to Nissy on this night. Ms. Brinkman, a professional photographer helped Cyclisme by taking my rickety point and shoot camera out of my hands and made the better pictures in this spread appear.
Meanwhile Jen's "roomy," Rose who attends PSU, set about the work of accomplishing an ethnography for class about the world of bicycle racing.
She was blessed with a lot of subject matter too, as she interviewed the whole team including Cameron Duff who won his first track event ever, an Alpenrose Mile, one of the races within the whole omnium that night
Posted by kidsofbike at 10:32 PM No comments:

Short track at PIR starts soon. I have 3 bikes in my basement available for Juniors. We should practice out at the I205 Greenspace area adjacent to the 205 bike path, North of Gateway, across from Rocky Butte (get the picture...)

What times work for you all? Friday evenings? Sunday Mornings? We need Naiqwan, DeyShaun and Marquel, along with coaches/instructors. We can set up a small course to practice skills and hot laps that will simulate the ST events at PIR.

Let me know what dates/times and how you can help. The boys will need help getting out there and back home. I can drive there with all the bikes and some food/drink.

Please reply here or to the Cyclisme list. Thanks!