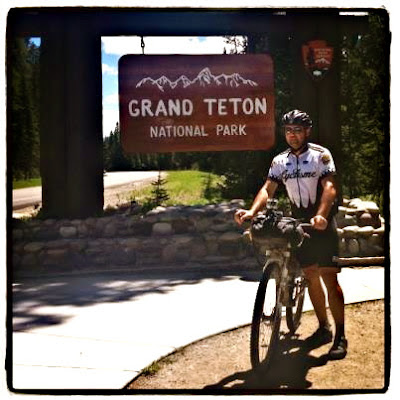 Raised in Sellwood, Steve Martine has been all over the world. 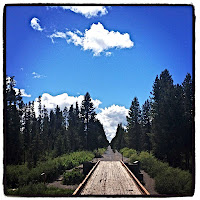 He raced at PSU with Bergmann and I, and he has worn a Cyclisme Jersey ever since.

Living in Florida today with his beautiful wife and children, he takes photographes for the likes of The New York Times.

However, for the moment, he is taking a month off to ride is bike across  America from north to south over the Rocky Mountains.

See his progress at the links below. 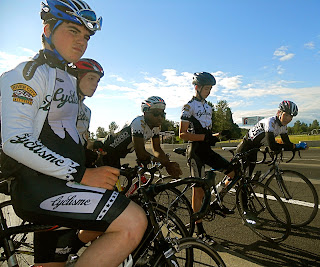 Trepidatious before the looming task,
faces were long in the strategy talk before the twelve mile Cat. 4/5 bicycle race starting in less than ten minutes.
No one was sure the hundred year old bicycle racing strategy would actually work.
The strategy was simple too, a long line of guys going fast for the finish.

"Would everyone be able to keep up," they asked.
"Could they attack if there was a break?" 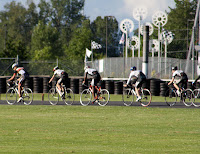 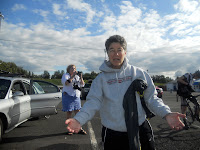 "Should they go for a hot spot intermediate prime sprint?"

"Yes,"  was my answer, "but just all go together."
And together they went!

They swarmed breakaway attempts, the hot spot sprint, and the finish line sprint like bees. 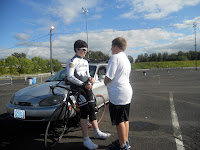 One guy in the pack was heard to say, "we don't stand a chance against this!"

Kent led them all out Daddy Dey Shaun Lee got second at the finish and won with points. 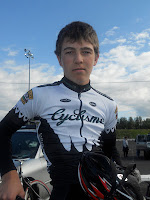 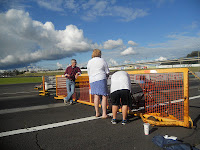 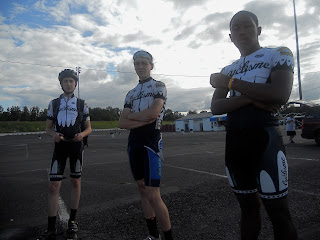 Everyone else scored lots of points because they were all in it - the hot spot and the finish, i.e. 3rd, 4th, 5th, etc. Keegan won the hot spot.

Cheering as loud as they could the Campbell boys brought their bikes too.

Parents played a great role of support and cameraderie. Tim Miller came and took some of the guys on a tour of St. Johns and then dropped them all back at Keegan's house.


It was great to see Luca and Dey Shaun, they add so much strength to our show.
Posted by kidsofbike at 10:49 PM No comments:


Posted by kidsofbike at 2:22 PM No comments: 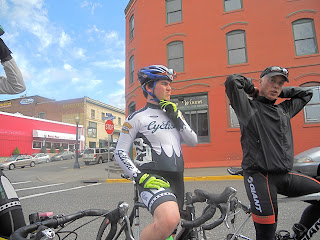 Upon our arrival in downtown Hood River bastion of kindness, experience, and support for the Kids of b.i.k.e. Hugh Givens (Promoter of the Piece of Cake RR Keegan won) offered some pre-race encouragement to chase away the butterflies (of which their were many) before the super technical Hood River Crit.


Posted by kidsofbike at 1:47 PM No comments: 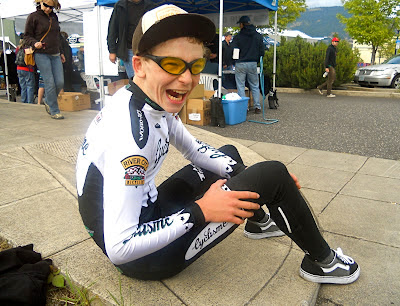 
Competing on the infamously difficult Hood River Crit Course for the first time ever, Kent Ross found his way to the front immediately, and put the voodoo whammy on the Wannabes!

He won 4 primes and finished in 2nd.
Holy moley, when you do that! 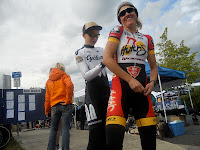 Rest before the Crit

New digs by the river when we moved to Hood River from the Dalles after the Time Trial, the modern Best Western was a fitting back drop to our unfolding drama. 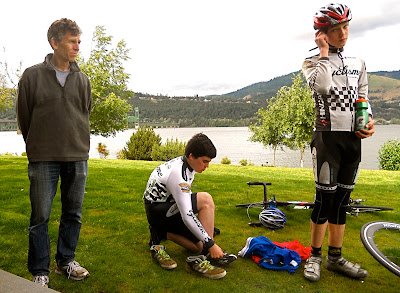 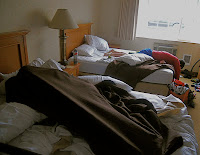 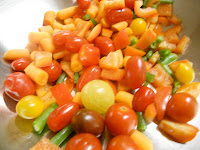 So tired they fell asleep in the car following their half hour ordeal in the wind.
We requested a late check out from the Country Cousins who were cool giving our guys more time to sleep.


While the child racers slept, their diligent support team packed the cars. And when after the short drive they arrived, the kids swam in the pool and farted around in the jacuzzi, while the support crew cooked a cornucopia of calories. 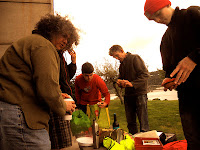 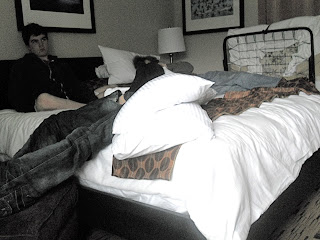 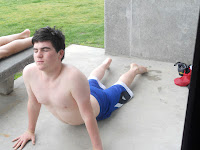 Swimming, yoga, lazing and grazing, and there was more time than patience.


Bone deep fatigued for the first time in their young lives, they were nabobs of negativism. Having yet to have won anything in this overwhelmingly big event, they were concerned about all sorts of contingencies - real or imagined. Finally let free, they pedaled the mile and a half to the Downtown Hood River Criterium Start Line in record time. 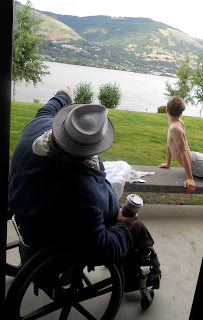 Resting in the modern digs we practiced good form with an intensity only found on race day. We also took the time for just a moment to look out and maybe see the place we had come to. This beautiful place so different from home.


Posted by kidsofbike at 3:44 PM No comments: 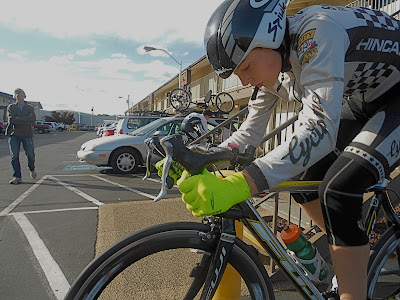 Called the race of truth by many, especially those who own funny bikes, even funnier helmets, and consider back pain a turn-on. Otherwise Time Trialling is weird, and foreign to the form we practice on all year.

Ahhh, there is what's missing from the Cyclisme training regime eh? 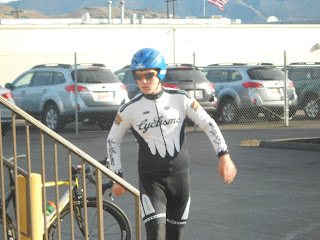 But that does not slow our impetus. Not with the beautiful support staff we have assembled. Ruth, Tracy, and Noah are so over qualified they were lucky to get the job. 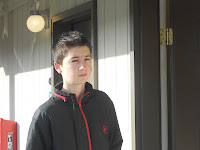 And Keegan and Kent are so gracious and easy to work with, anyone would find the work a snap.

Our racers want for nothing.

After berries, juice, oatmeal, toast and eggs for them, I made our little support crew and some of our hotel neighbors bacon potatoes, and eggs. 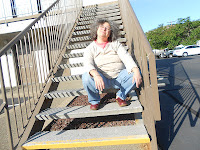 Wind is howling. It's blowing so hard on The Dalles, one wonders how the racers will even stay upright on this point to point course from The Oregon Discovery Center in the Dalles to Koberg State Park in Hood River.
http://www.obra.mthoodcyclingclassic.com/obra-stage-info/obra-stage-2/ 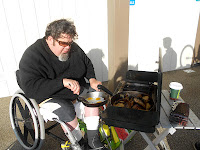 Posted by kidsofbike at 9:02 AM No comments:

Learnin to Suffer for 10th

Posted by kidsofbike at 11:21 PM No comments:

Luckiest Guy in the Parking Lot! 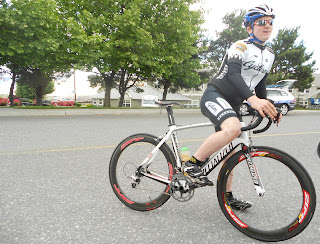 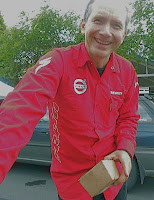 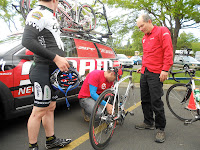 On his way to the first stage, riding through The Dalles old town downtown, Keegan O'Neill's rear derailleur disintegrated with no more shock than the cracking of a potato chip.

Suddenly, despite all our preparation, our Super Nova was extinguished.
It was sudden, tragic, and complete.
We  set out to find a derailer hanger in one of the local shops.

In the Dalles Oregon on a Friday afternoon,
ALL WERE CLOSED.


But the luckiest guy in the parking lot suddenly became the talk of the peloton.
Sue Butler of Hall of Mountain Bike Oregon Fame status asked everyone on our guy's behalf for a hanger or even a bike.

It was all too much to hope for.

But lo and behold the SRAM neutral race support men pulled down off the roof of their bright red car an $8,000 Specialized Carbon Fiber road bike, and handed it to Keegan.

Unfortunately the seat binder bolt was faulty and  during the race the seat post slipped along with Keegan's position in the General Classification. 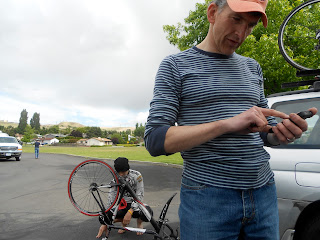 Keegan finished a little late, and after the race thanked SRAM with awe and emotion.

But to be ready for the next day Keegan still had to find a derailer hanger and get it on his bike. Once again,  our beloved friends came to our aid.

Portland Velo's Micheal Girard got his modern communication device out of his pocket and started taking pictures to be sent to eagerly waiting mechanics at Crank bicycle shop back in Portland.

Then Mr. Girard set out to transport the Junior's bike up and down the mighty Columbia in his SUV. Later that evening Keegan's sainted mother appeared at the Country Cousins Inn in the Dalles, Oregon with the bicycle.

Keegan is the luckiest guy!
Posted by kidsofbike at 10:28 PM No comments: