Aggressive on the details - like starting at the front, and measured in his movements amongst a big pack of bruisers, Kent raced with cool calculation. 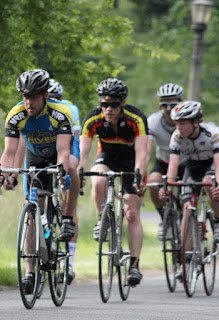 Kent has also been working on his sprint at the Pursuit of Glory Track Class, so watch out! When he flatten's that back and launches into 500m of pure speed, he's serious.
Posted by kidsofbike at 1:23 PM 1 comment: 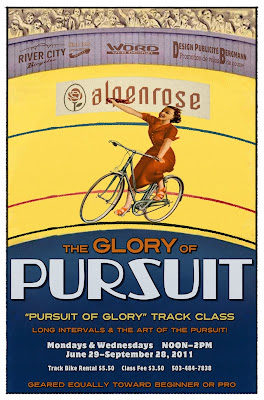 Posted by kidsofbike at 10:36 PM No comments: 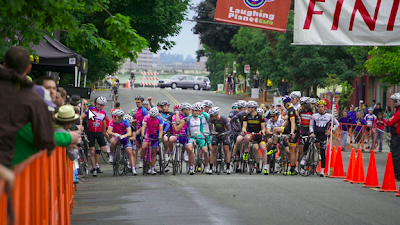 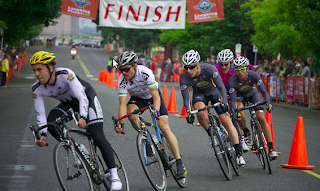 Lining up on the line, hard focus was the new feature on Hansen's face. A bad start in Hood River, all but took him out of the big pro/am crit a week before. Surviving those corners at the back for almost an hour changed the way he looked at crits.

After an early display of speed and failed bike handling, Jake held onto the Oregon peloton until he could counterattack himself. Away alone, all the top players reacted and bridged up. Jake drove the pace at the front until a break was away.

When he did finally attack, it was big. Beardsley crashed and Bedford got 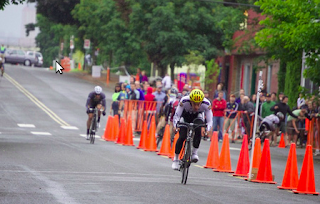 ctory while rolling no hands down Albina Street, wondering if he had been greedy.

"No!" the drunken people outside the Bars yelled, "Take it all while you can!" 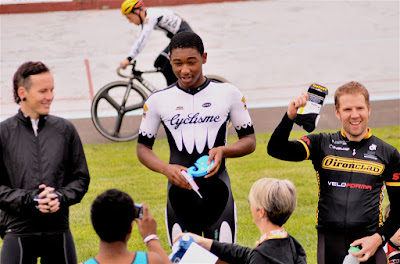 Care of his Coach
Two weeks ago his coach, Jake Hansen changed Dey Shaun's front chain ring from a 47 to a 49, and things started to happen.
At last Friday's Night Sprints Novice Omnium, Mr. Lee threw down a burst of speed that made crowd gasp in surprise, then cheer with the thrill of what they just saw!

Meanwhile, Cyclisme Racing Programs was developing a stable of Madison partners for Elite Jake Hansen under the direction of Cyclisme Madison Coach Nils Tilstrom. Dey Shaun was practicing in that project.

At the Heartbreaker Track Race Saturday, the plan was just to have Dey Shaun throw Jake into the Madison and have Jake chase by himself. But as Jake became tired and lost a lap, we called Dey Shaun in for Jake to recover.
To everyone's surprise, Dey Shaun lost no ground. In fact he helped the team broaden their gap on the 3rd place team.
Following a telephone pep talk straight from Los Angeles, by David Pulliam, the Madison success was surpassed by a team performance with his teammate Naiqwan Pellman in the Cat 5s. (results here) The two teenagers worked together to dissect the adult competition. Naiqwan, himself a Cat 5 Match Sprint Medalist would lead the field out into a panicked thin line,
then Dey S

haun would come flying around for the victory.

When Dey Shaun heard the announcement of the victory, he smiled shyly and said "No way! I won? That's the first time I have won, one of these!"
Posted by kidsofbike at 3:24 PM 2 comments: 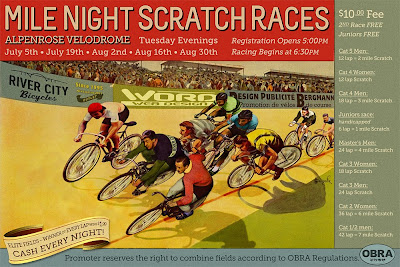 See the NEW Dates!
Posted by kidsofbike at 10:53 PM No comments: 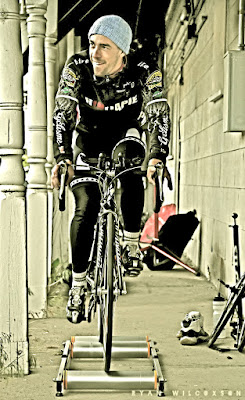 by
j.Fritzgerald b.
Photos
by
Ryan Wilcoxson

Taking it to the next level is a shock when in the hunt for National glory. MHCC featured amateurs and Pros so large even our Oregon Cup leader could not upset the balance of power.

This time survival amongst the fittest was "Job 1" in a race that started with 155 people and ended with 105.

"I couldn't make it to the front, but the one time I did, I couldn't go down hill that fast!" Jake Hansen lamented after the first road race.

"These guys are crazy! They attack in the gutter!" Hansen said.

Thanks to River City's David Guettler and his Time Trial man Mark Gefalia, 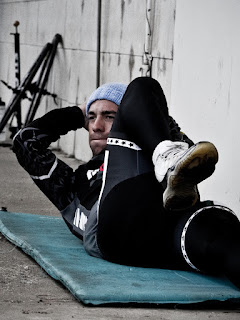 Jake arrived at the time trials in a lower position on the bars and $1,000 Zipp wheels on the bike, and hope glimmered in the in the haze of the malaise.
Only in the TTs did Jake pass 70th place twice.

In the crit he lined up so bad, he never saw the front, and was pulled, luckily after the time minimum that gave him a pro rated time penalty, but the ability to continue the next day.

Despite his personal struggle, Jake's weakness brought strength and leadership to the whole Cyclisme program. To pay for Jake's race fee, Father Word drove his son in support of the totally pro women's field. Mother Cambell drove her mini van to the limit at the head of the Pro/Elite MENS CARAVAN as the chariot to the Lead USCF OFFICIAL! 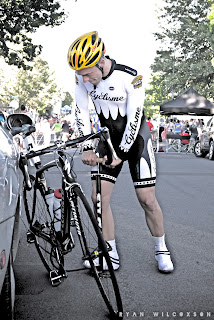 Tim Miller and Mary Pattiani were at wit's end for two hours of wild and wooly cat 4 men's action. They learned a TON about bike racing.

I got to see The Columbia Gorge completely from my campsite at Memoloose State Park. Then with Greg and Willy C. I was able to thrill and mourn at the amazing Discovery Center in The Dalles.

Also big for me- Perhaps in response to the race pressure, Jake and I motor paced on the way home from Trout Lake, Washinton. With cyclist-filled cars lined out in both lanes behind, watching in praise, Jake motorpaced spun-out at 63mph for about fifteen minutes like a bullet flying South toward Hood River.

It was a site to see!
Posted by kidsofbike at 12:34 PM No comments: 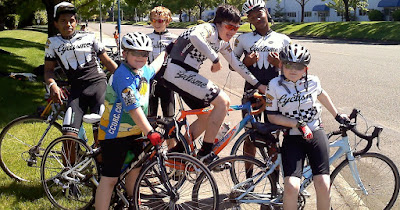 In a whirlwind of weekend racing
Cyclisme Stars
Shine! 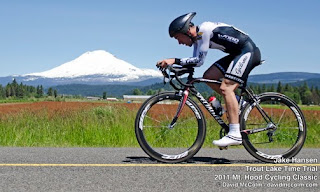 Racing for the low lying fruit in the swamp lands of Swan Island, and Vanport, to aspirations of respiration high in Hood River "Cyclisme" was the Word.

Jake Hansen was in his first big stage race
The Mount Hood Cycling Classic and the competition was daunting, but Time Trials kept him in the game. Camping at the Memaloose Camp site on Thursday evening, the Gorge left 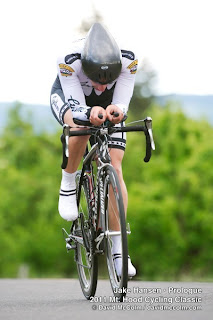 a lasting impression on the whole team.

Four drivers from Word-RCB by Cyclisme drove in racing events to trade volunteer time for Jake's race fee. Mary Pattiani of b.i.k.e.-Serratto days, Cindy Cambell and her boys, Tim Miller, and Randy Word all drove in the Mount Hood Cycling Classic. On the way home, drivers stopped off at the team campsite for some grub.

Victory reigns bright in the life of the Lees,
as Dey Shaun Lee took his first big victory.
Hammer time happened at the Hammer Crit Saturday.
Protected by a blocking team captained by Naiqwan Pellman.

Word-RCB won all the primes and the race.

Saturday was also a day of "Firsts" for first time racers Greg and Willy Cambell. Willy finished Tenth with the big Juniors, while Greg gave a lesson to the little kids older than him in the "Kiddie" race.

On the same day, Jake turned in a great Time Trial Time in Trout Lake Washington, and met Joe Holmes, the Directeur Sportif of one of the NW's biggest amateur racing teams, Hagen's Berman. Joe Holmes is the former director for the LeMond Fitness/Captain Cra-Z Soap Professional Cycling Team. He was very kind and asked Jake all sorts of questions.

It would be a great opportunity for Jake to be picked up by this Pro/AM Squad.
There might be a place for Jake there too when you consider some of the TT times at MHCC, like:

(of course Lang Reynolds trounced Mr. Hansen in the overall GC, but there is light for hope here in this "race of truth")

Sunday Jake would get hammered in the hardest road race of his life, but Naiqwan Pellman would grab Silver and thirty bucks cash in the Vanport Kermesse.
Posted by kidsofbike at 1:28 AM No comments: