All power to the people!


Summer heat and a dockett full of events made the 2014 Senior and Junior Track Championships tough.

But with training, fitness, and good humor, Word RCB brought home a bucket of gold, bronze, and silver.

Lunch and snacks and cool drinks under the big tent kept everyone topped off and ready.

Double D was awesome as he did the mechanics for everyone. Pete Kirby made sure everyone had over 100psi.

Racing in Senior Women's Events as well as the Junior Omnium, Gillian Bergman donned Silver and Gold respectively. Her Team-mate Robin Jacobson raced the Cat 5s for Silver. Using a super easy gear to warm up, then shifting to a new high legspeed racing gear, she set a new personal record for herself in the 3k.
In the Junior Boys Omnium Scratch Race, Willy Campbell pushed the field up track as Jaden soon attacked over the top. Willy won Silver in his division for the effort
Jaden Salama, Tim Bergmann, Fergus K, and Double DD raced the 1k, and the 4k.
Pete Smith joined Tim, Fergus and Double D to race the 4k TEAM Pursuit, as well.
Posted by kidsofbike at 12:37 PM No comments:

To vie is not to rival! 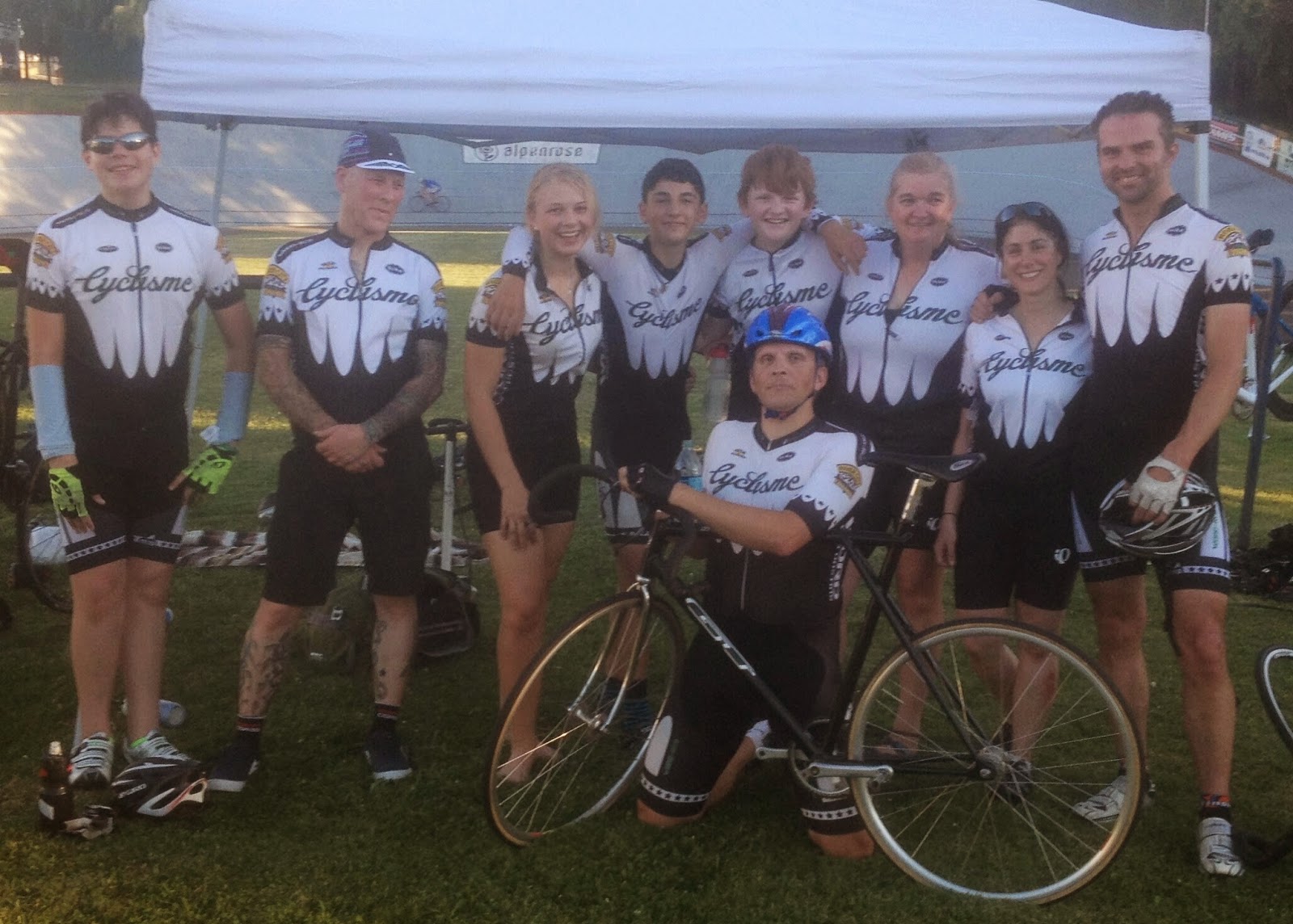 Approaching the twilight of a season in which the pace of the race calender has been casual, if not leisurely when compared to the intensity of Squadra Cyclisme years past, the display of athletes and athleticism in last Tuesday Night's Masters/Juniors was  as classy as anything inThe Lore.

Moreover, the Team Morale was high, as everyone was happy to see one another, and ready to put the hammer down on the competition. With so many big name racers out of town or elsewhere on Portland's busy Tuesday Night, Cyclisme speed took the event in just about every category.

Word RCB was the life of the show with the only pop up tent (presented by River City) on the infield, and a bigger turn out than Portland Velo and Half Fast - who normally rule the event.This time they were very kind hosts, who got in step with our noisy example by calling out times for all to hear. Then finally there was our race winning prowess. With all of the Juniors cheering, and our many coaches coaching, we made the neighbors think it was an international event.

The format was two events. 500m and 1k.
Listed below are the racers and the times of the "Word RCB, by Cyclisme".

Posted by kidsofbike at 7:57 PM No comments: