Cold rain on the last ride of 2015 did little to cool the boiling desire of these intrepid athletes.
Veteran Captains like Bergman and Kinnell are a reassuring sight in the parking lot.

Super up and coming talents like Tony "The Rock" Escobar, and Jason "Counselor" Skelton make for exciting times on the open road.

Weekend rides are the place where details get surmised and challenged. When holidays and family are busy, it is easy to lose track of winter clothing, summer fitness, and ideal equipment adjustment.

With the traditional Cyclisme winter regime of Rocky Rabbit fast approaching, this was the last casual adventure before the longer harder rides begin.

Posted by kidsofbike at 9:15 PM No comments:

Category 4 Oregon Bicycle Racing season points winner for velodrome racing, Ben Waters, is doing his winter training, and everyone on his team wants a piece of him. From city limits signs to crests of big climbs, Ben is finding plenty of competitive exuberance amongst his Cyclisme mates.

Younger riders attack the start with fraudulent bids for victory, while elder statesmen stay like they are earning food for their family's table.

Merely the "off-season" for some, Cyclisme packs are attacking like there is no tomorrow.

Poor Ben has to be vigilant as attacks come from all sides.

Fergus Kinnel and Tony Escobar are two 40-plussers who are taking it to their 27 year old pal. Honing his skill with hard knocks and big sprints, they are winning practices so Ben is ready to win RACES!
Posted by kidsofbike at 12:36 PM No comments: 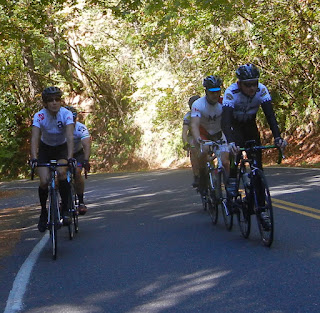 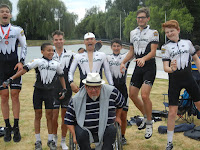 "What event should I race? Jaden's voice blared out on the speaker phone. "Should I race the Juniors, the 3/4's, or both?"

Brad heard from outside the car window and yelled:
"Race the 3/4's!"
"Thanks a lot Brad," the post pubescent voice rang back."

"Does our our strategy change, now that I'm a 4?" Jaden asked meekly.
"Stop it," I ordered. "Everything is the same."

Launching a bazooka and holding it for long enough to lap the field, or at least make a selection is a tall challenge.

But last Thursday Night, after having been "Catted Up" by Candi Murray from the 5s into the Track Cat 4s, Jaden Salama attacked at the whistle and held off the pack for an entire 12 lap Temp (point a lap) Race.


When the race was over, Jaden came off quick in total exhaustion.
I ran over to him and exclaimed, "did you ever imagine you could do something like that?"
"I get it," he coughed out.

Posted by kidsofbike at 6:39 PM No comments:


At the 2015 EDDY (division) Championship in Eugene, our Team Time Trial team was made up of four generations .

Since the early nineties, Cyclisme represented benevolence, good form, simplicity and team, and it always developed it's own style.


When in doubt, always returning to these simple fundamentals, Cyclisme keeps finding ways to create a feeling of victory.

The victory was sometime heralded on the podium, and sometimes only in the heart.


This year, the "Saturday Practice" boys are leading three age divisions of the  Oregon ITT Cup. Their support of each other is their strength.

Notably,  this month, the OBRA web page used a photo of an Elite Cat 1/2 field racing at the Velodrome. In the picture three historically famous stars of the Cyclisme Racing Program were featured. Nils Tilstrom in 2nd, Trevor Sparr in 5th, and Kent Ross in 8th.
Posted by kidsofbike at 3:28 PM No comments:

Juniors,
Alex White,
and
Jaden Salama,
as well as "the old man of the road,"
Tim Bergmann raced in two categories of the three race Omniums.

Alex finished 2nd in the Juniors while Jaden sprinted his way into 3rd in the 4/5s. Also in the 4/5's Bergmann managed a nice scoring 6th while working for Jaden.
Posted by kidsofbike at 7:34 PM No comments: