Cyclisme had a skeleton crew for this one. Just me and DeyShaun rolling out from Portland to Hillsboro. DeyShaun was excited, as he heard that this was a really flat course and he could use his power.

After signing in and riding a lap with Mike Mann the rain started to fall lightly. We went back to the car for last minute prep and warm-up. We rode to the starting area to find that my group, lucky number 6 was slated to start as the next to last group. Again. Only Eric had it worse, his group was dead last.

Someone with more time and math skill than me did this figuring (revised 10-27-09):

The number of lineups where a PARTICULAR number is in a fixed configuration of spots over the 4 races is 9!*(8!)^3… provided that particular number has never landed “in the beer” (which is true for the cases we’re looking at here, and doesn’t change the overall number of possible lineups. For example, if someone lands “in the beer”, instead of having (8!) ways for the other groups to line up for EACH of the 9 possible slots (2 thru “beer”) said group could fill had they NOT landed "in the beer", said group can only line up in the first slot, with (9!) ways for the other groups to line up. Either way, there are (9!) lineups possible the next week.)

So, if there are 9!*(8!)^3 ways for a PARTICULAR number to wind up in a fixed non-beer configuration over the 4 races, let’s look at how many fixed configurations are as bad or worse than two 9th place and two 8th place starts:

Not nearly as rare as a lightening strike--but, sadly, more evidence than the FDA or Big Pharma are made to provide...

I don't buy into a conspiracy theory, but that's some damn bad mojo to get the lousy start places 4 times in a row.

Anyway, we were off, with all of 4 racers behind me. Eric crashed in front of me near the middle of the first lap but was quickly back up. I crashed a couple laps later and was also quickly back up. I was run off the course (nearly into Tireless Velo's firepit) by some hack who couldn't steer his bike. I still managed to pass a bunch and finish in 33rd from my starting position of about 113th. 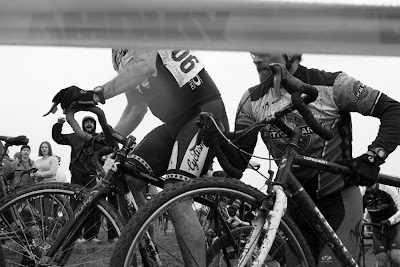 It was the funnest race so far due to an excellent course layout that made the most of a flat landscape, and some mud to make things slippery and interesting.

Eric will get a good starting position in Astoria this coming Saturday, so I expect we'll see him in the points. I'm going to miss the Saturday race, but will hopefully get a good start slot on Sunday. The forecast shows that it will be a muddy race, wooo hoooo!

Posted by kidsofbike at 4:35 PM No comments: 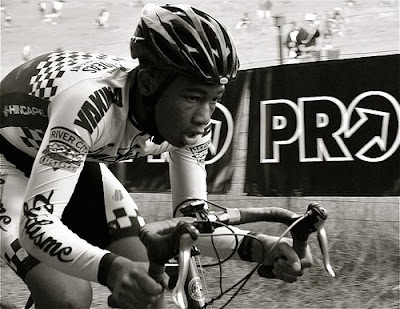 Photos courtesy of Shane Young and CycleOne coaching (except the B&W of DeyShaun, which is from Brujo). 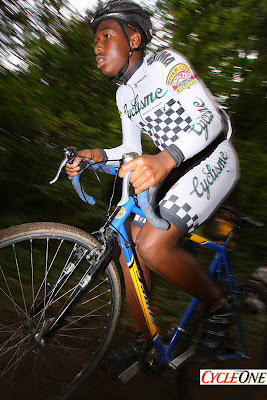 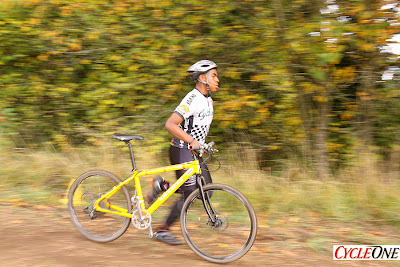 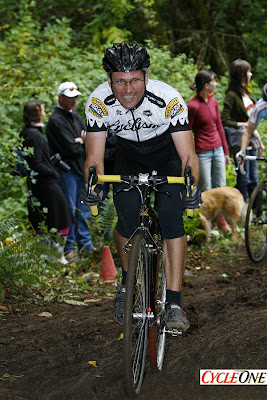 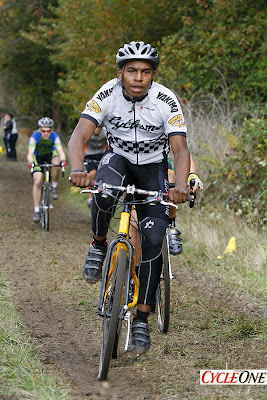 We met at Naiqwan's place to convene before the Cross Crusade #2 Race. Dave, Jeff, Liliane, Naiqwan, Danny and I headed North to Rainier High School. The course has a reputation of being the "best" cyclocross course of the Crusade, but it is among my least favorites as far as placing well. The course features an extended climb (for a cross course anyway), that favors the climbing type of rider. It is a fast course, and with dry weather did not have any boggy or technical areas.

Before the race we met Eric Lanners in the parking lot and we set about registering, warming up, etc, Naiqwan asked if I had any leg warmers he could borrow, and I replied "no, but try this..." and had him embrocate up with some good old Mad Alchemy Cold Weather Warming rub. Good stuff, he probably felt it in the shower hours after the race!

I watched Dave stage for the Mstr C race, and he was again slotted to a lousy back position (right next to former Cyclisme racer Darren Pennington) due to the random start draw scheme. Dave rallied hard and passed over half of the field before finishing. 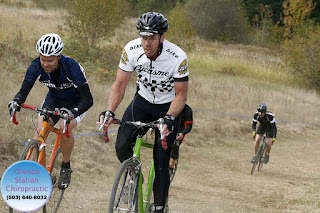 After some more warm up Jeff, Eric and I headed to the start corral for our race. Jeff and Eric are both in the "3" group, who lined up 2 before my "6" group, which was next to last. Ironically next to last is worst, as the last group not only gets a free 6-pack of beer, they also get the first slot at the next race...

Anyway, we start and I slide to the left onto the grass and get past a bunch of guys in the gravel. Then I almost puke on the climb, and just try and go full steam ahead for the race. I got past Jeff at one point, and he jumped on my wheel and let me know it. Jeff expected me to have a good line on a bumpy off camber turn, but I tried it with no brakes and ended up overcooking and bushwacking through the blackberries (maybe you had to be there, it was pretty funny). 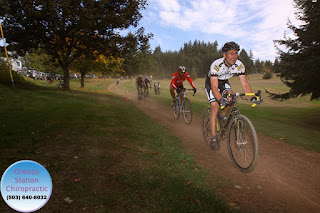 Anyway, we all passed a bunch of people, and Eric just missed getting in the points (and future series call-up). 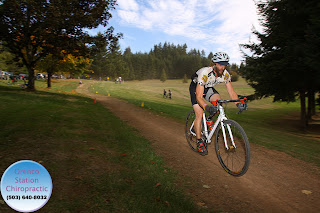 Naiqwan rode with a purpose, and scored a 5th place finish, improving on last week's 6th place. No mechanicals, and clean, aggressive riding was the order of the day for him. 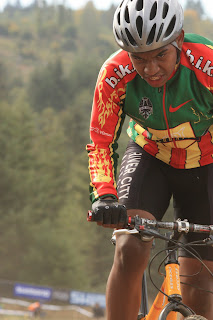 Next week, mud at last. 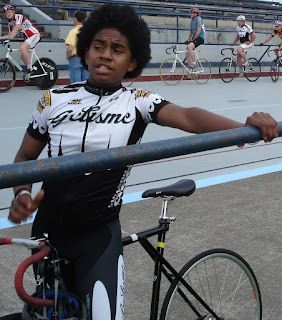 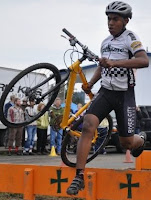 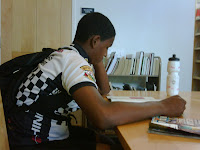 over
barriers
with
sheer determination,
and
cutting up single track
on skills honed by the backwoood race courses of Oregon MTB racing,
Naiqwan
"Angel"
Pellman
is now leading Cyclisme
into the
2009 Cross Crusade.
While only 13 years old, he is rated the BEST 14year old in the State!
Thats a lot of "13 year old."
In the Oregon Bicycle Racing Association's rating system this 13 year old Junior is leading OBRA's thirteenth ranked team "Word-RCB" into the winter season discipline Cyclocross.
Naiqwan did not just arrive out of thin air.
Originally a new to Portland Arizona transplant, he was led by his cousin Caezar to join a young Dey Shaun Lee out at the Alpenrose velodrome, back in 2007.
From his days towing the disabled back and forth from PSU University to Powell's bookstore, to pacelining at the ghettodrome; then from winning medals at Alpenrose to long drives around Oregon with his men's Mt. Bike Team.
Angel has risen.
But his biggest moves have not been on the bike, but in the classroom and after school. Naiqwan attends the SEI Academy where he is known as "Angel." Once he started attending Tony Hopson's famous school where "Life Has Options," his grades improved. 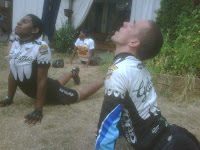 After school, he gets on his cycling clothes, and is soon met by one of his elder teammates who ride with him across town to homework sessions at the Woodstock Library, with lunch and yard work and yoga at the Atomic Ranch. By being respectful and open to everyone's advice he has pulled the team together.
Himself, for beginners like 40 year old metal worker Fergus Kinnel, he is a fine coach of the many skills involved in getting around the velodrome, but Naiqwan has has also enjoyed receiving excellent coaching and mentoring. Examples include Jake Hasnen on abdominals and strength as well as day to day road training, and Greg O'Brien who has driven him to mountain bike races, paid fees, and taken special care to create the best bicycle possible, despite limited resources.
Posted by kidsofbike at 11:09 PM 6 comments:

Jeff, Liliane, Naiqwan, DeyShaun, Greg and Danny all piled into the O'Brien mass transit rig on Sunday and headed over to Alpenrose. Csaba got us on the radio and via the airwaves guided us deep into the mayhem to primo course-side parking.

In addition to our car load, about 59,000 other people decided to race cyclocross today. Eric and I were bummed to hear there were no call-ups from early season stellar performances (I was really bummed, as I still have lingering proudness over my 3rd place Saturday at Hood River. So far in my middle aged race career the words "O'Brien" and "podium" are not often heard in the same sentence).

We got over our disappointment and yelled encouraging stuff to Csaba, Dave, and a bunch of other random people on the course. We warmed up, then DeyShaun decided to somehow rip a hole in his tire. Jeff and I did a Nascar style quick cassette swap to get my spare super-trick light-weight Tufo-clad-Mavic rear wheel onto the Jamis in time to roll over to the start. Here's what it looked like for the master B's. 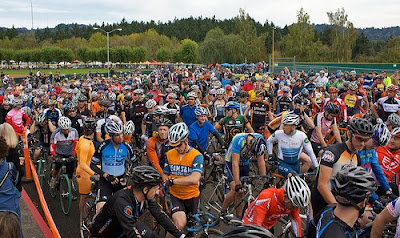 I'm the guy way in the back on the left (right next to Dr. Bob), about the size of an ant on your screen. They stage in 10 groups. The numbers 0-9 are randomly drawn, and you assemble according to the last digit of your race number. The "lucky 6's" that I am part of were the 3rd to last number called up, so probably 75 or so lined up in front of me.

The whistle blows, and we sit waiting for 10 seconds or so until we can actually start pedaling. I found some lucky holes and gained a boat load of spots before hitting the first dirt section. I went back and forth with Tireless Velo buddy/nemesis Mike for a bit. Then we all jumped over barriers. here is what DeyShaun, Naiqwan and I look like doing that: 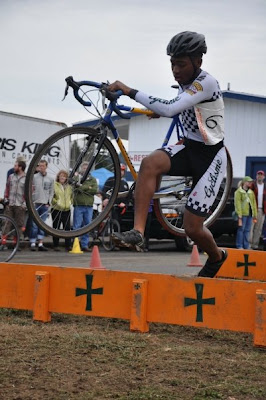 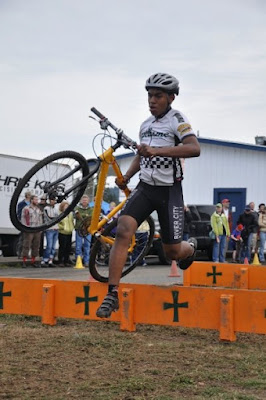 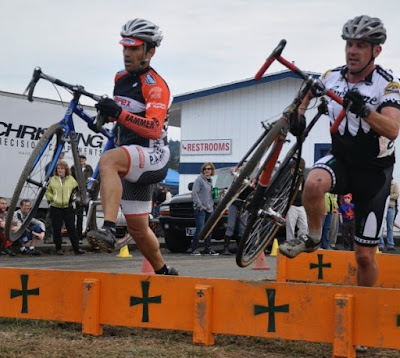 I slowed down to let this other guy get in the picture too. You can also tell that if you contribute to this blog you get to put in a bigger picture of yourself!

Jeff crashed approaching the gnarly staircase runup and ripped a hole in his skin and his $90 tire, but unfortunately I don't have a picture of that. The cool support crew from Shimano had a spare wheel for him after he ran to the pit so he was able to finish his race.

All in all a great day. Naiqwan was the stand-out, with a strong 6th place finish in the very competitive Junior Men category. Dave and Csaba in the upper half of the almost 200 rider Master C field. Eric and I passed a lot of people in our race but couldn't quite make it into the points. I rode clean, and felt great. Jeff got back on the horse after a crash and mechanical to finish out the race, and my boy Danny managed one full course lap in the Kids "A" field.

Brrr, its cold up there! 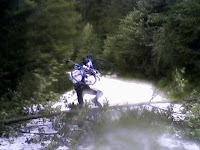 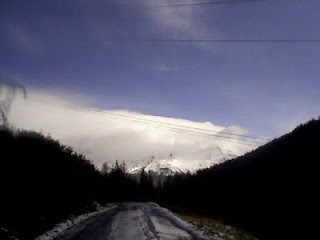 Snow on Lolo
By Jake Hansen


Supposedly record crowds gathered at Alpenrose for the Cross Crusade.

While the chaos ensued in Southwest Portland, Aubrey Edwards, Randy Word, Stephen Bedford and myself opted for some quiet and stunning scenery along Marmot Rd & Barlow Trail.

The rain held out on us and everyone rode REAL STRONG up to Lolo Pass Rd. Randy and Aubrey bombed back on Hwy 26 while Bedford and I decided to get crazy and tackle the snow.

And yes, there was snow and toe freezing temperatures up at 3400 ft.

I got some pretty high quality pic's from my phone camera of this crazy guy practicing his cyclocross up there too...

Until next time!
Posted by kidsofbike at 7:13 PM 3 comments: