"I know it's raining. You want me to do what?" Noah asked.

Broadway Starbucks was the first stop before Chanticleer Point - better known as Women's Forum which helped Rocky Rabbit get 50 without climbing TOO much in the rain.


Rainy Sabbath travelers rambled into the brambles just beyond the Sweetbriar neighborhood of Troutdale .

Brave were the souls who climbed east up the Market/Mill street bike path to Gresham.

Rain came down mercilessly for the first hour. Only when the rural farm lands appeared did the precipitation ball up and slow down. Fog made descents slippery through fields of arm chair agriculture as the old road serpentined to the Stark Street Bridge and then over the Sandy River.

Speeding into town, we stopped at the "Country Store" after Greg Miranda sprinted and won at the Silverdale City Limits sign. 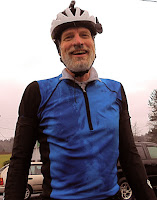 The "Student Special" was a popular item as three were ordered thanks to a charitable gift from the Jean and Dallas Rydick Fund for the Humanities. 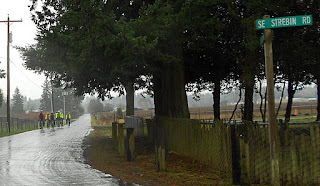 "My gloves are wet, but I'm okay!" says Dallas.

"I just need to sit in the car for a second," said everyone else except Pete.

On the roots of Larch Mountain Pete Smith was perpetually on the lay for an escape off the front, and the terrain became another invitation.

After a photo and the turn around, it was an epic team descent. Big rollers Tim Miller and Dey Shaun Lee turned some big speed. Keegan and Greg reeled in all moves while tending gently to the six people fighting to stay on their wheel.

Everyone showed great strength and skill all the way to Keegan's big victory at the Troutdale City Limits sign.

Rolling, arms in the air, languishing in a long yoga pose almost off the back of his bike, Keegan let thousands of imaginary fans cheer his success.


Then Greg Miranda pushed folks home.
Posted by kidsofbike at 6:37 PM No comments: 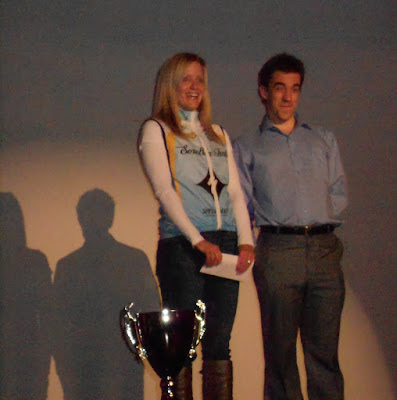 Men's Oregon Cup and Junior All Around awarded to Word-RCB, by Cyclisme! 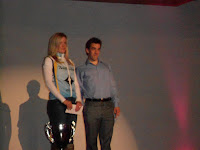 Thanks to a great cycling family in a strong cycling community, Jake Hansen and his Junior protoge Keegan O'Neil stepped onto the OBRA stage to receive top Top Honors last night. 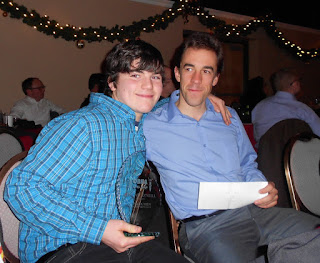 Both guys were beaming as they received affectionate accolades from their team and loved ones. 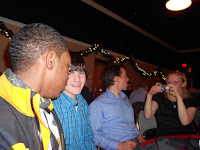 Splinter Wren delivered velvety praises for "The States Elite" when he invited Sorrella Forte's Jen Akeroyd, and Word-RCB's Jake Hansen to the stage.


Kenji Sugahara and the whole OBRA gang commissioned quite a show as the savvy Madison's crew catered a dinner and a no-host bar. 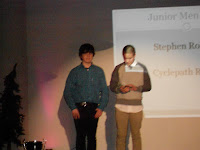 o OBRA Award Winners each year for the last three years in a row!
This year's duo followed Blomberg, and Leonard last year, and Pellman and Hansen back when Jake was a Cat. 3, the year before.
Our parents and supporters were thrilled by the pomp and circumstance.
Camera's clicked as the all the heads of state, having just attended the Annual OBRA Meeting, reflected on there team one last tim 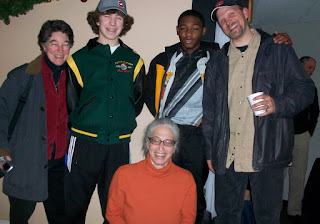 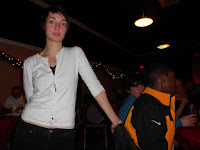 Curtains to a season that will be credited as our best TEAM BAR finish in the team's 18 year history, many on 2nd place Team Cyclisme were just happy to see it end. Keegan raced in over 90 races. Hansen won two National Medals.

But the real story is about all the exploits of the dedicated group of volunteers who shared in a vision in 2011. A vision of benevolenc 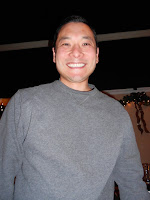 When Boys and Girls Club Dire

ctor,
Tim Sicocan first listened to b.i.k.e.'s proposal for programming collaboration, he said
"you got to keep em movin'!"
Tonight the little girl in the yellow shirt and red galoshes, never stopped moving. 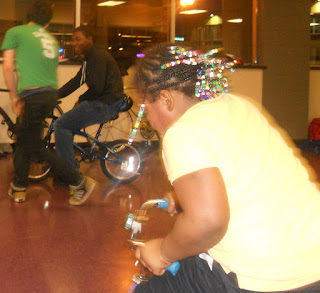 Only last week
she
walked on her bike.

Other kids zip around with reckless abandon. Keegan can avoid anything, with no room and still stay up. 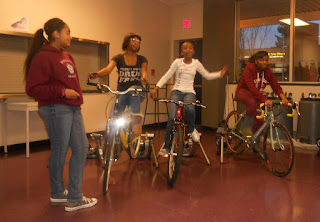 They pretended they were riding to Lloyd Center for the Hollister sale.

Some kids were beside themselves, they were having such a good time. Our b.i.k.e. mentors rode beside them.
Noah got some time in on the stationary bike
with his elbows
bent.

Nothing was very hard work, as it was more like having fun.

The little girl in the yellow shirt rode like 60 miles. Finally she fel

l off in a horrible high speed crash and said calmly "both my legs are broken."

A veritable obelisk of true grit, she recovered in time to do yoga.

Curious about everything, and strong as can be, she did everything in our class full tilt. 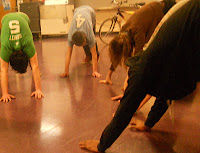 Next thing you know Tim Sicocan sent for us to come to his office. 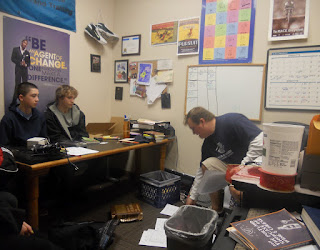 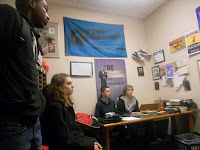 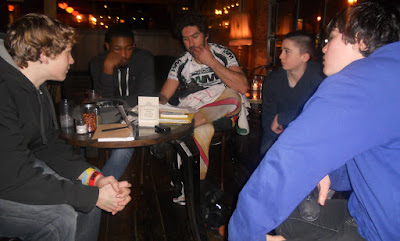 He wanted us to fill out paperwork so that our mentors could take on a more official role at Boys and Girls Club.
Mr. Sicocan want's to quantify the outcomes of our peer mentoring activities.
He was telling us we are important to their Club.

Though now becoming bleery eyed with fatigue, but starving for pizza, the b.i.k.e. mentors went across the street to find their own mentor waiting.

Greg Miranda was a Junior Elite cyclist himself and has worked with a major Pro Development program sponsored by the national company Waste Management.
He talked to the junior's about race day nutrition and about the world of corporate sponsorship.

With books, printouts and actual pro team proposals, he shotgun blasted the teen age minds. But to get things started, Greg volunteered for the first two chapters and their ensuing book reports.

They can because they think they can. Virgil 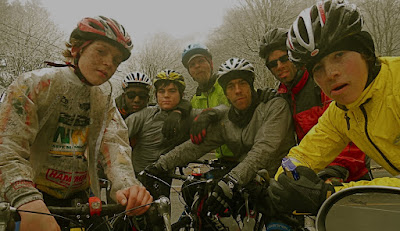 Get up and go to school!


Professor Hansen has returned to give a lesson.

Dressed to kill in 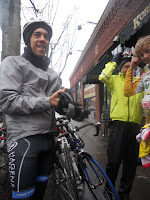 his new Hagens Berman kit, Jake was swarmed like a moviestar by the paprazzi
when he arrived for the ride. 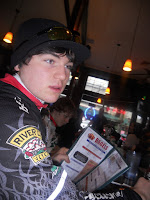 steam and with good momentum toward the new year's strategy for 2012, we celebrated with a big before-practice-breakfast at Kornblatt's Deli in NW.

Pete Kirby brought his nice family, and shared some brilliant ideas he has about development.
It was a unifying force to know so many were working behind the scenes. 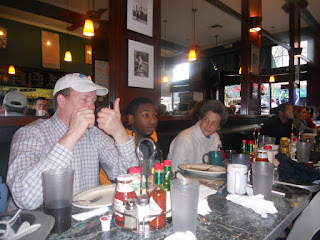 All with radios, anxious junior racers finished their breakfast and waited outside like maf 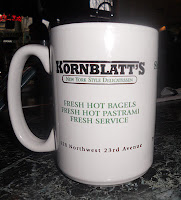 ia to announce Jake's arrival before he was two blocks away.

After a long luxurious breakfast,
folks were charged up to barrel out into the snow. When Jake arrived it was just one more exciting reason to ride.

Once on the road, the Radio-Juniors took control of the pack. 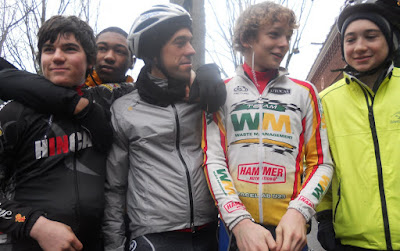 With a 500 foot freezing level, there was not a lot of Stumptown left to work with.

Two columns in downtown right up Broadway Blvd. made sense. The warmth and familiarity gave some solace in the face of the radical weather.

Once past the freeway though, the muzzle came off and the white fangs of winter were revealed.

ed in a blizzard.
Huge wet snowflakes blew parallel to the ground, biting any skin they found.
The back road climb to Hillsdale was covered in snow. Hillsdale proved to be about as high as we could go, so the team dropped right back down to Barbur.

Once on Barbur a full speed paceline carried the team all the way to Naito Parkway, then lights threatened to split us up.

The break was a welcome reprieve for some.

Soon more snow would come just from the climb over the steel bridge. 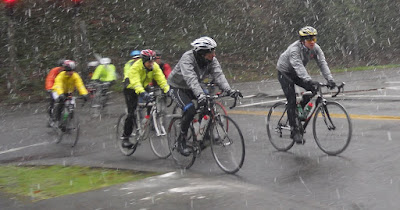 Williams was desolate as the threat of snow was enough to keep the famous NoPo commuters on the sofa.

Swan Island saw the first major attack of the day as the radio controlled mod squad launched in perfect unison going down the long strait descent down Going.

Many laps and monsterous motor pacing made cutter's circle poignant but not decisive. Waiting for Csaba to rejoin our ranks after a post breakfast parking debacle, most rode in the

protection of the pack.

Climbing out from the lowest point in the city rain and wind blew the climbers sideways.

Rolling out the Overlook Bluff the columns flew with the help of a tail wind. Right past UofP and up onto the St. John Bridge.

While up there riders could see the snow line as a jet pilot can see the cloud line.

Back down on HWY 30 it was a gritty gross mess.
Jake got a flat. Folks were really starting to crack.
It was hard.

But next came the climbs through the top of NW up on 25th, then Vista - straight up, no chaser.

By this time though, the day had warmed and the freezing level had gone up.
The team climbed Montgomery and went by the Mojo Tree.
Jake Keegan and Kent climbed "Paris-Roibaix."

The rest went around to meet them on Patton.
With 7 minutes left in our three hour goal, everyone agreed to go around Fairmount.

The sprint from under the bridge saw Kent challenging Jake, and Jake was very kind to let Kent lose by only a little. 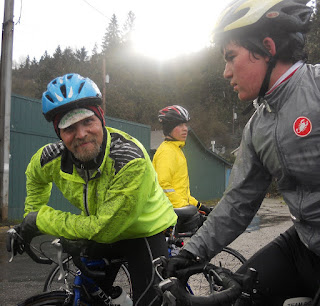 Happiness does not come from doing easy work but from the afterglow of satisfaction that comes after the achievement of a difficult task that demanded our best.
Theodore I. Rubin
Posted by kidsofbike at 9:39 PM No comments: