Dey'Shaun "Daddy" Lee is moving to North Carolina to pursue opportunities in education and occupation with his father, Herman Lee.

Dey' Shaun who was the founding father of the famous "Fixies" team borne out of Portland State University, leaves a legacy of championship and team building unrivaled in the Lore of Cyclisme.

Dey' Shaun was discovered with Fergus Kinnel in a  "Rollers 101" community outreach offered by b.i.k.e. at Dishman Community Center using a team called "The Men" including Dr. Tony O'Hotto, Chris Sauter, Jeff Gerwing, Greg O'Brien, Charlie Wicker, Dave Wingard and his kind wife, Ms. Sojean Mah.
Dey' Shaun Lee became the key carry over Cyclisme member after the exodus of "The Men" who went on to strengthen the formation of the Yakima Vigilantes cycling team.

Dey'Shaun ate sushi, studied architecture and watched in awe, as a group of college age fixed gear riders set down their cigarettes long enough to learn how to shift.  They became fast. Really fast. Two of the fastest were Alex Lightman and Trevor Spahr.

Though his college friends were loyal and sustaining, Dey'Shaun needed a team of his own.  Soon he was joined by two fellas his own age, Naiqwan Pellman, and Marquel Brown. 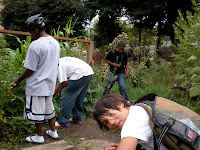 As they learned to race, they ran PSU. From The Community Garden up on 12th Avenue, to two Starbucks for coffee grounds. From their rollers in the Broadway Building up on Jackson Street to their bicycles stored in the Architecture Department in Shattuck Hall, they gained new ideas for self empowerment.

A year later, "The Fixies" were joined by two men, named Stephen Bedford and Jake Hansen. To say their enlistment was special would be an understatement, as they went on to gain wins and medals at Elite Track Nationals. Their championship propelled Dey'Shaun into a world of elite level training and competition. 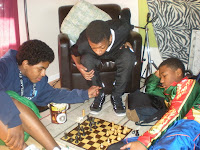 His highest pinnacle was to race in Mike Murray's Alpenrose Six Day paired with Oregon Cup  winner, Jake Hansen. They rode to the podium in the "A Flight" tier of Cat 1/2 racers. Dey'Shaun thrilled the crowd as he hung in with the state's finest adult men, at age 15.

As Dey'Shaun grew older, new Juniors joined the team. Juniors like Keegan O'Neill, Sonny Chiago, Kent Ross, , and Noah Beggs. They all enjoyed Dey'Shaun's gentle demeanor and deep skill base as a resource for their own development. They even nicknamed him "Daddy," for his venerable ways.

Intellectual in his riding style and people skills, he was a savvy blocker. He could seduce even the most alert gruppetoes to slow down and give up the chase. Once he and his teammates got Keegan Oneill eight minutes off the front of a hypnotized pack. 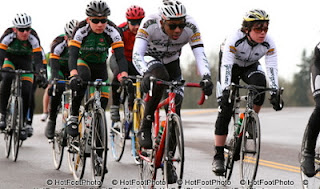 But Dey'Shaun shined truly at his best, off the bike, in the community. Serving, learning, and teaching, are all skills he excels in. From culinary arts to grant writing, from donor base development to architectural solutions, Dey'Shaun is conversant and creative.


Tending to the needs of the young, the old, or the infirm, he is brilliant. As a lead mentor in b.i.k.e.'s after school "Rollers 101" outreach at Blazer Boys and Girls Club, Dey'Shaun pioneered implementation of the "Five Mintue Club" stationary bike workout curriculum, as well as other components of this award winning program.

Daddy moves on to higher ground, but will always be remembered at Cyclisme as one who gave back to those around him with
Benevolence, Good Form, Simplicity, and Team.