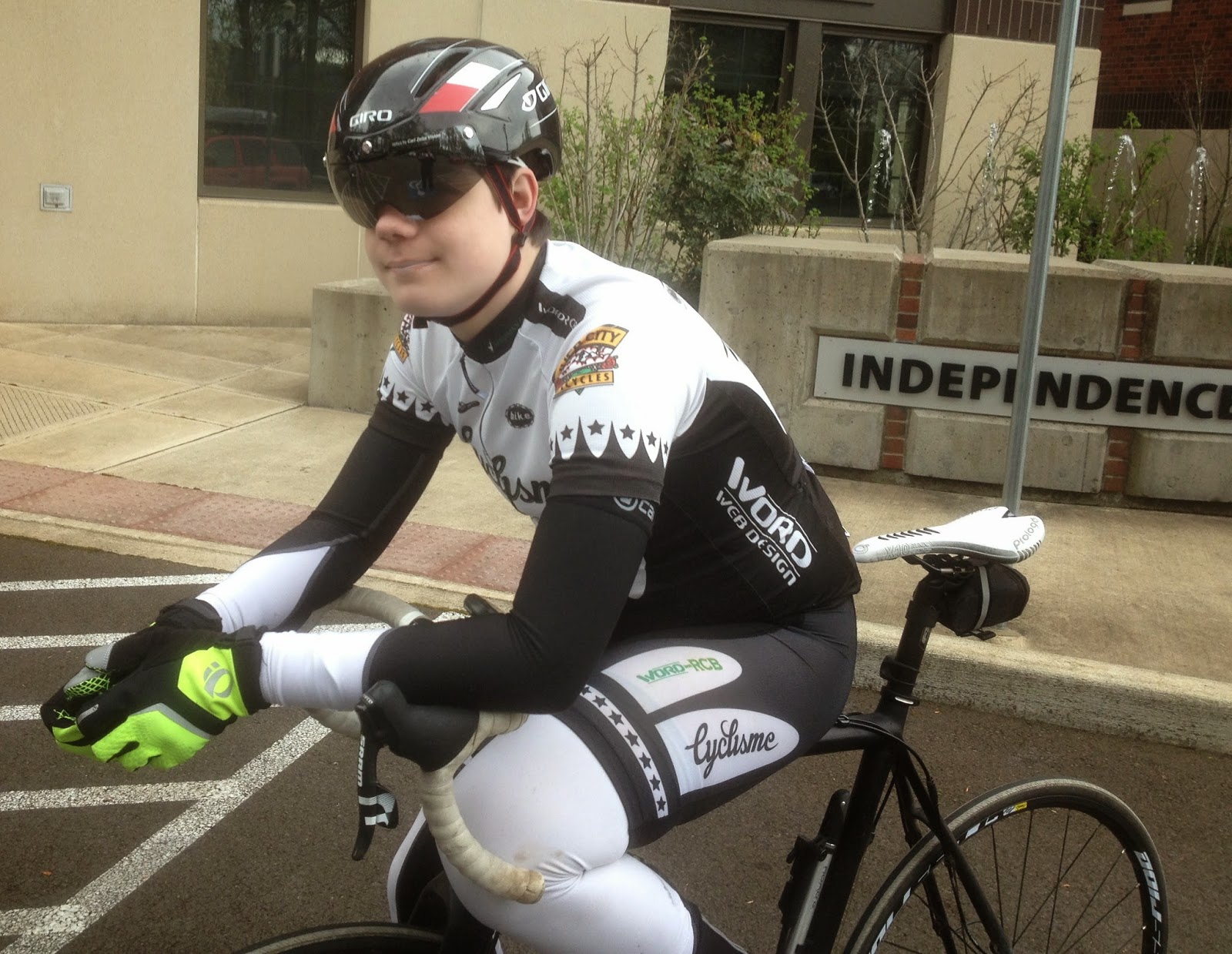 A Time Trialler by trade, Alex soloed for thirty one miles to victory.

After a neutral rollout, the first attack came right off the release.
Alex answered with strength. He had planned to be benevolent, and just mark the early leaders and generally ride slow for a while, giving the little kids a chance to get their money's worth.
But when 14 year old Haller Bora went to the front, everyone else was history. Alex decided to git while the gittin was good.
Bora tried to stay stuck to his wheel, but with all the rolling hills, it was mile 10 of 31 that Alex had left everyone behind.
All that remained was a rainy, hilly, vehicle escorted time trial to the finish.
With just over a half kilo left to go, a junior breakaway was announced to the finish line crowd.

One spectator was especially boisterous.

Alex looked calm and composed as he crossed the line, victorious.
Posted by kidsofbike at 12:31 AM 1 comment: 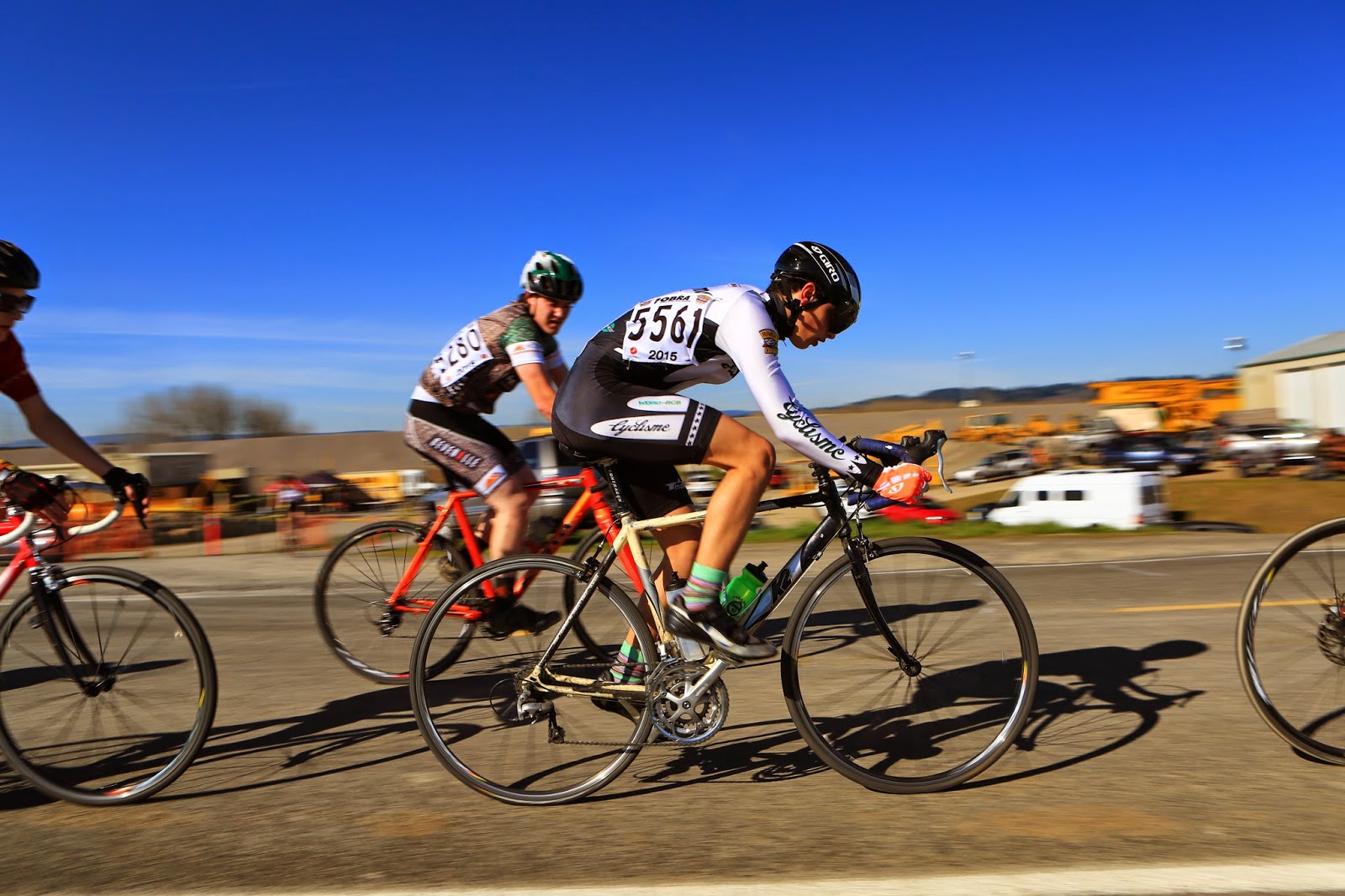 Winning photo credits:
leonard@hotfootphoto.com, Bob Mionskie
the third and final race of the Dirty Circles Road Race Series in Woodland, Washington,
confirmed Jaden Salama
the Series Winner.
Winning all three races revealed him to be the new kid to watch in the OBRA peloton.

"The third race was the hardest, The wind and rain was like another whole opponent," Salama lamented.
"The Junior peloton is not well trained, said Salama."There were times I would be trying to line up on the cross direction of the draft, and another kid would just come and fill my spot as if we were in a paceline,"

"I felt relieved to find everyone wasn't quite as scary as they seemed," Salama said.

Actually, the scary OBRA Juniors are alive and well racing in the Senior Mens' divisions. The National Criterium Champion in Jaden's Division , Keelan Ontiveros races with the Category 1/2 Men.


Jaden, a relative beginner in his first year of road pack racing, used his trepidation to train properly for entre in the world of OBRA. Last year, Jaden stuck to Individual Time Trials on road and track, racing in packs in practice, until finally he raced in the OBRA Track Championships.

Posted by kidsofbike at 1:35 PM No comments:

Everyone on the team who is looking ahead to the April 18th "AS THE RAVEN FLIES" Oregon Individual TT Series event in McMinnville, is thinking about getting some more miles in, and a little speed work. Some brave souls took to the race calender for both this Sunday, at Dirty Circles II.

In the 18 mile Junior race, the Hapi Go boys attempted to breakaway mid way through the 1st lap. Cyclisme marked the attempts. Our speed shelled some, bringing a field of 6-7 through the finish area on lap 1. Even more dropped during Lap two, leaving a select group of 5 for the final lap. Approximately 2k from finish, Paul Furst, an opposing racer made his move. Alex responded the best he could but couldn't catch him and told Jaden to go. Jaden took off, caught the breakaway artist and closed the show down in the last 200m. Then one last burst, and Jaden grabbed victory. Alex rolled in immediately for 3rd place.

In the Masters 4/5s a tough gambit of waiting to line up, and a hole-shot to the potential balance point out of the wind but away from the whiplash waited at the front somewhere yielding only momentary reprieve from a new week of speed and experience and revised strategy by the opposition.
Blistering hot from the start, Captains of other teams were not about to let their team's speed be trapped in the narrow road's big pack bottle neck of last week.
"I was holding on as high as 2nd place for dear life, but that 2nd Lap HOT SPOT caught me off guard." said Tony Escobar. "before I realized what was happening, it was too late!"

"I had a great time though, " Tony added.

In the Senior 4/5s Brad Davidson had a spectacular time. Surfing the sweet spot at and near the front, Brad was able to chase down and catch breakaway attempts.
"I spent way to much time AT, and OFF THE FRONT." Brad said. "When the sprint came, I totally missed the bus!"

"Had a ton of fun though!" Brad said.

Back in old River City the tempo was brisk in the beginning and it intensified when the Home Krew climbed the slopes of Mt. Tabor. Willy Campbell who is taking on a full Oregon Cup TT Series after his tough collarbone breaking crash near the end of last Summer, is now a whole head taller and a budding leader of the younger Saturday crowd. Today was his day to try adding a Sunday adventure to his weekend of training with some very big Lore laden adults. Robin and Fergus!


Posted by kidsofbike at 5:05 PM No comments:

Woodland, Washington was the location of the first pack race of the season. Featuring 6mile loops around the bottom land behind a high dike holding back the mighty Columbia River, narrrow roads kept the packs sewn up tighter than sardines in a can.

Racing in a pack is terrifying. Just racing alone on the open road in an Individual Time Trial is daunting work. Merely staying on a rural road with big cross winds is hard enough. But add other people, team dynamics, and more speed and you have the cumalitive challenge of road racing.

Randy narrowly avoided a crash in the sprint and finished top 20. Cliff held on while boxed in the middle the whole race, but then got dropped by the pack sprint in the last 500meters to roll in about 25th. Jaden hid amongst the leaders doing little bits of work to keep the pace high, then sprinted for the win in the end.


Race Report from the Master's 3/4s and 50+
by Randy Word
I lost the race in the parking lot! Sounds crazy, but there were 78 riders in our field and the roads are very narrow. People lined up for the race well before the start while some of us were out warming up. I probably started around 40th or worse.
I spent the entire race (which was too short, in my opinion) just trying to move up. The only place I could move up was on the edge of the road, and only occasionally.
In the final sprint there was a big crash in front of me - I hit my brakes, hoping no one behind would run into me, but then saw an opening, let go of my brakes, and got through the crash unscathed.
The sprint was incredibly sketchy, it was slow and people spread all across the road banging handlebars. I was just starting to get wound up and could have blown by nearly all of them if there had been an opening, but I backed off when I saw people banging bars & shoulders. I ended up 19th, and was somewhat disappointed, but yet happy to have made it through my first road race in about 4 years without any incidents and still feeling strong thanks to a flat course. We did 50km (31 miles) in just under 1 hr 15 min. The weather was perfect, scenery was great, and the rush of 78 riders on a narrow country road was fun.

Cliff and Jaden raced earlier in the day. I actually saw Jaden, and the Junior's pack, on the road as I was driving in. I didn't get a chance to talk with Jaden, but he won 1st place! Congratulations Jaden. BTW Be sure to contact OBRA or the chief ref (terricamp2011@gmail.com) and let her know Jaden is on the Word-RCB by Cyclisme team - the team affiliation is not showing in the results.

I did get a chance to talk with Cliff after his race, and before mine. It sounds like he did exceptionally well in his first road race. He rode smart and finished with the pack. He said he had a great time and it was a good experience. I think he's going to have a good season. I also noticed that Cliff did not have a team affiliation showing. Maybe we need a reminder sent out for everyone to include their team name on their license application and race sign-ups.

By Jaden Salama
Inexperience.
From the start line to the finish line, inexperience abounded.
In the very first lap, on the first bend, a very large rider came up on my right, and slowly rode up to the person in the from of the paceline. When he was next to the leader of the paceline (who had no idea he was there), he just sat there, not saying anything. The front rider swerved right a little bit to avoid a peice of debris, and the insurgent slammed on his brakes and skidded in the loose dirt he was in.
In the paceline, many riders pulled through, and then, worked hard to ride alongside their teammates at the front of the paceline. Some riders would attack hard in the middle of a lap, only to be caught, breathing heavily, by the rest of the team. Due to difficulties at the front of the paceline, some riders would randomly hit their brakes, almost crashing me and other riders out on multiple occasions. Not only were these riders inexperienced, it didn't seem like they had much of any training.
The one rider that seemed like he knew what he was doing was pretty burnt out when we reached the 500m mark, so I just decided to sprint for the finish. I didn't see anyone after that, however.
In the midst of all this inexperience, there was teamwork and companionship. One rider weaved in and out of the paceline to provide a young teammate with shelter from the wind. When someone attacked, there was a large cry of "Attack!".
When I was leading the pack, I took my pull and then drifted left and slowly slowed down to drift to the end of the pack. After a couple seconds, I didn't see anyone pull through, so I looked behind me and found that the entire pack had "pulled off" to the left with me, and was slowing down.
When the end came, I sprinted. I was amazed by how much ground I gained. I was a long way off the front as I crossed the line.
I am thankful for all my training with my team. It really made life easier today.

Posted by kidsofbike at 2:38 PM No comments: