Two Jakes and a Piece of Cake 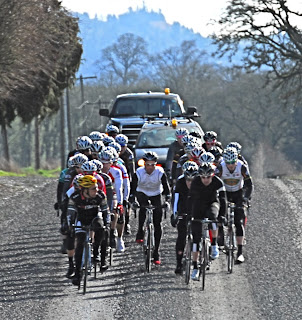 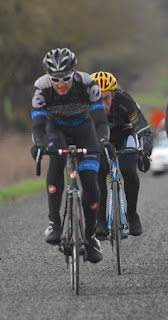 rized the souls of cyclists silly enough to slap down their cash for a 70 mile ride in this 2011 rendition of a March Saturday's "Piece of Cake Road Race" - Stage 2 of the Oregon Cup. A flat farmland circuit considered by most to be Oregon's version 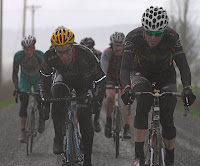 of a Spring Classic.

Jacob Rathe local boy gone Garmin - Chipotle Development Team Pro, was fresh back from his big win in the Rutas de Americas in South America, and maybe the only person who didn't seem nervous at all.

Jake Hansen moved to the front early hoping to choose some good road in the early gravel. He even did some big rolling that turned into an all out attack. Team Oregon had similar designs, and got Romer away with Riffle from HPC and both had their teams blocking.

Donald Reeb, Stephen Beardsley, and Butch Martin's red jersey kids of Hammer/CMG chased that early half an hour break down. 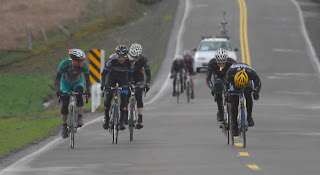 Early in the race Jacob Rathe warned his protege Jake Hansen that Rathe would be marked and if he attacked, all would go after him. His advice was, when they go, you wait and counter attack. That advice would reveal itself later on. 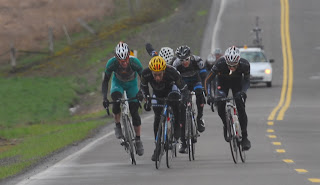 For now Hansen was rolling again, and the next selection of seven formed up. The new group included three Team Oregon men, Bucholz of Therapeutic Associates, Zach Winter of Guiness, and Rathe. Cross wind echelons were the order of the day.

After rolling that group into a three minute lead, Hansen attacked with a tail-wind in the gravel. The move stripped off Therapeutic Associate Bucholz and Team O's Edgerton. Team O actually worked together to help shell Edgerton at one point. When they realized their error, the tried to slow up and eat their gu-packs. So Jake attacked them with the packets still hanging from their mouths. After a monster pull, the pursuers had disappeared from sight.

Now down to five, the breakaway endured another wave of rain, sleet, and sun, and the racers ran their echelons accordingly. 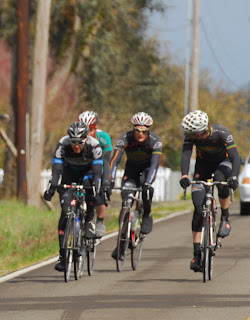 Up onto the rise and into the big wind Rathe went to the front for a little dig. Team O stuck to him like a new tattoo.

When they all sat up after the effort to catch Rathe, Jake H. went himself.
Rathe just watched and smiled.
Like an interior designer organizing his livingroom, Rathe had set everything up.
Elijah Romer looked at Rathe. Chris Swan looked down the road at the gap. Their hearts must of sank. Winter of Guiness looked so tired, he must have just been thankful for the moment of slow pedaling.

Rathe sat and smiled for about thirty seconds, then demonstrated why he is a Pro. He set to work pursuing our Jake like a Panther after a rabbit. Our Jake was pedaling squares. He was all over the road. Rathe was smooth, rolling straight like a missile.

Jake looked back terrified. Jacob kept closing the gap.
"I thought Jacob would come flying by any moment and nip me at the line," said Jake Hansen, "keep pedaling all the way! I kept saying to myself." 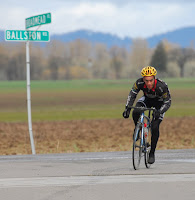 Both coach and athlete recognized the fundamental tutelage of the pro to the amateur.
Immediately after the line, both heaped thanks onto Rathe for all his benevolence.

"Afterwards, all I could say was thank you," Hansen said of his first moments after he crossed the line and Rathe crossed 3 seconds later. 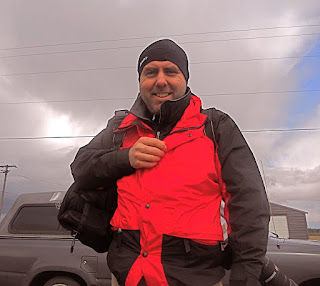 Piece of Cake 2011 featured dramatic weather and the gorgeous rolling fields of Amity, Oregon. Put on this year by one of OBRA's most talented old school impresarios, Hugh Givens made his course seem like a work of art. 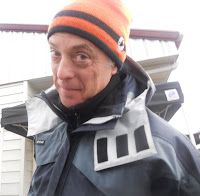 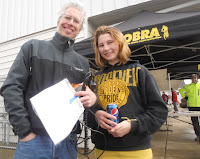 Kindness and respect seemed to abound in the parking lot as if we were the royal family thanks to the promoters old school vision. Of course we did turn out to be the Heir Apparent thanks to Jake, but you will probably read plenty about that soon.

My "Old School" revelation of the day however, appeared in the form of a photographer shouldering a big camera and wanted to sit at the back of the station wagon "Lead Car" I was driving, to photograph the "Course en Tete" (head of the field) of the Cat 1/2 race.. 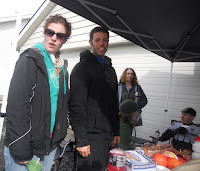 The photographer was Luke Pingle, (red coat pictured above) a family man and attorney living near Washington D.C. 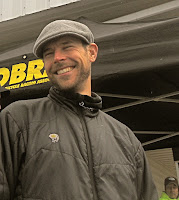 who used to sprint against Brad Gephard (please see here), back in the (my) day. 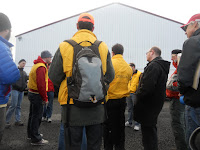 Well, from race commentary to world politics we had a gas!
Both of us sporting our CRAFT skull caps, we were two race fans just six degrees apart,
as we made our ways down the path of life. 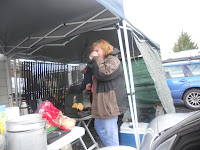 When Jake vs. Jake became the victory pursuit, we cheered and whahoo-ed like crazy frantic kids. I hope you get to see today's way back perspective when his photos come out. Thanks Luke, that was a hoot! 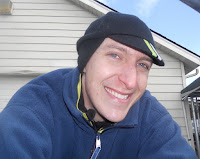 Meanwhile back in the parking lot, our beautiful Cyclisme was waging a culinary Word - RCB and it ROCKED!

Thanks Cindy and Chip for cooking. Congrats to the Cyclisme ra 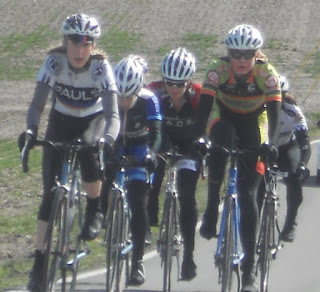 cers for all their fine and wild rides.


Please stay tuned for more and look to http://oregon.cyclingaction.com for results.


See Sandra Clark at the back of the Cat 4 Women's race winning selection breakaway. (below left)
Posted by kidsofbike at 8:06 PM No comments: 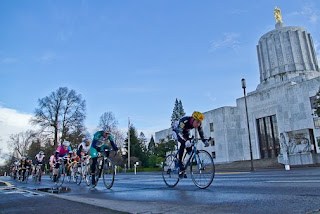 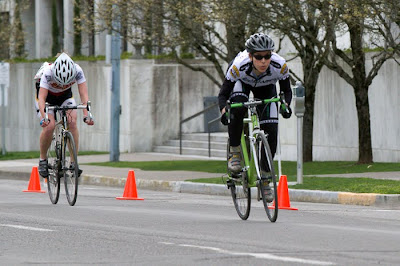 challenged themselves before the steps up to Oregon's Capitol in the Capitol Criterium held Saturday in Salem. 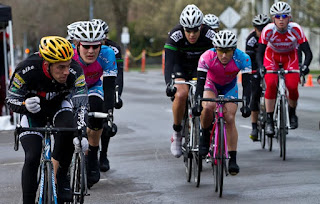 Lori Bernardini engaged in an epic struggle between two Ironclad Cat 4 vets and a Collegiate co-ed from Willamette U. as Lori took Bronze in her first Cat 4 women's pack.

Jake, still full of snot, was well marked by an admiring peloton, but finished about fifteenth.

The Juniors rolled like a Team with Dey Shawn Lee setting up fast, a two man time trial for Keegan O'Neil and Kent Ross against BBC and it was close the whole 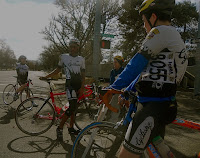 Also in the news,
I went swimming
in my new bathing suit given to me by Stephen and Catherine Bedford Cooper.

Down in the Salem YMCA
I organized a very competitive game

of dodge ball
amongst the many 7 and 8 year olds in the pool,
and I was able to reign supreme.

Crushing cartilage with every thunderous swing
of my dodge ball firing arm,
poor innocent Salemites were relieved to acquiesce
to the superiority of an old school dodge baller
with Portland game.

Now their folk songs reflect the memory of a great man who came from Portland in a wheelchair to teach them the ways of Dodge Ball.

Posted by kidsofbike at 3:42 PM No comments: 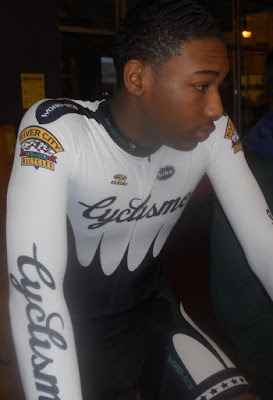 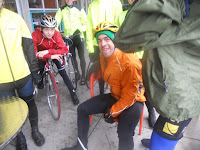 6:51PM Friday March 11th, 2011
Decision is made to give Dey Shaun a new bike, despite unfounded concerns of negligence. Mr. Lee has been th

e focus of a Team push to get his grades up and was just showing improvement in school and on the bike. He had just been running 9th in the Banana Belt Series at Hagg Lake, and was going to be part of a team plan the following Sunday.

10:37AM Saturday March 12th, 2011
Dey Shaun wins team sprint to "Stop Sign Ahead Sign" in an unprecedented burst of speed.

1:54PM Saturday March 12th, 2011
Dey Shaun is fit by Chris at Crank and adjustments are being prepared to be made. 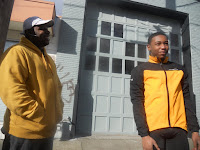 aking adjustments in preparation for the big race. 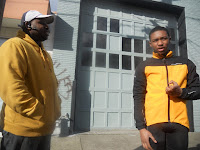 Having been in communication with Dana Spears-Talbert, the Director Sportif intercepts and greets Herman Lee, walking up the street, and proceeds to call Dey Shaun on his cell phone to come out of the bike shop.

3:53PM Saturday March 12th, 2011
Dey Shaun comes walking out of Crank and is struck warm to see the face of his father from North Carolina who he hasn't seen in years. 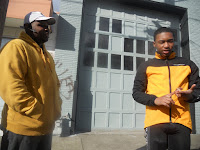 h, 2011
After greeting conversation and good cheer, DeyShaun and his father return to the bike shop to procure the item of 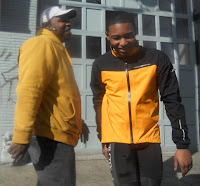 4:13PM Saturday March 12th, 2011
The Lee gentlemen reemerge, both in favor of the improvements and one in stone cold awe of the sheer quality of such a machine. "I don't think I've ever seen such a bike in all my life," said Herman Lee. 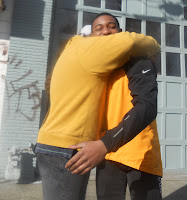 7:11AM Sunday March 13th, 2011
Sandra Clark and her Mark arrive in the dark to take Dey Shaun Lee to Hagg Lake for Banana Belt #2.

11:47AM Sunday March 13th, 2011
Juniors clamber into the car and get out of the rain where we have a meeting about a simple strategy to lull the peloton into waiting to attack. The plan works well enough to get past first lap, as they worke 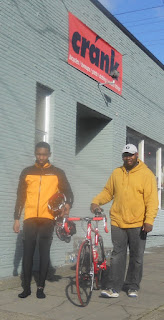 1:41AM Sunday March 13th, 2011
Over a quarter way around Hagg Lake on the second lap, the Juniors of Word-RCB are working together in the pack.

2:29PM Sunday March 13th, 2011
Following some epic driving of their bicycles past the Master's field on the shoulder of the road, the Juniors sprinted against a pack of their peers. It was a sight to see! Dey Shaun was in his very first official road racin pack sprint - certainly the first one I have ever seen where he threw down like this, Racing all the way to the line, you can see he even torques the bike out of alignment for a nano-second. Wow!

That is quite a difference a red bike makes in one kid's life! 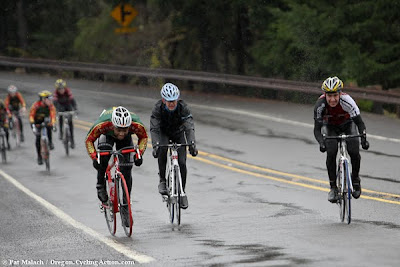