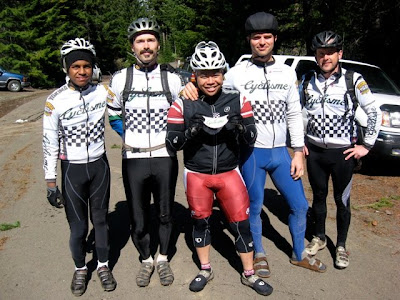 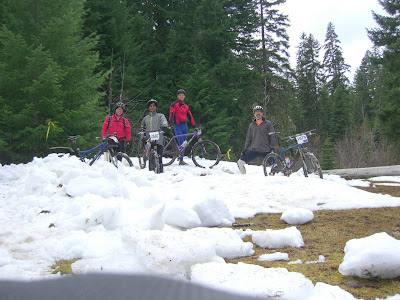 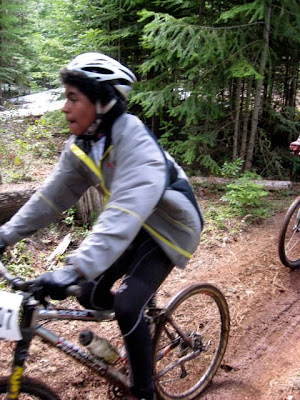 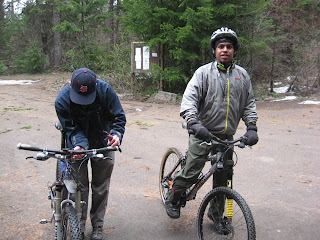 Csaba, Naiqwan, Greg and I pre-road the parts of the course on Saturday after stopping by John's for burritos. There were huge sections of old hard snowdrifts across the trail. I could see that many people would be furious at not being able to ride sections of the course. I even thought about not doing the race on Sunday. But I'm glad I stayed the course.

It was freezing cold and snowing a little bit. We piled on everything we had and broke out Greg's propane heater, while we waited for the short track. Naiqwan, Csaba, and Greg launched 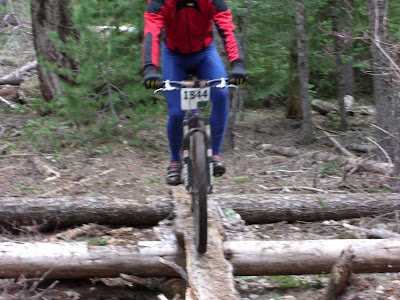 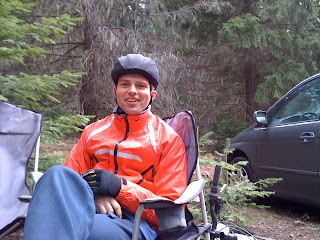 at 3 and I (singlespeed) went at 3:30. Naiqwan had a mechanical a lap before the end. Csaba was feeling that hill. (He hasn't be able to ride as much as he would like.) Greg looked good. I was in last place for the entire race until I finally passed a girl on the last lap. That was tough!

Next day:
Completely different weather. It was sunny and warm. I overdressed but so what.
After a confused start, we went off right behind the Cat 1s. I ended up doing 30 miles which was quite a workout. The course had everything;big downhills, twisty singletrack (up, down, sideways), mud (just a little), roots, rocks, smooth, narrow/steep/straight 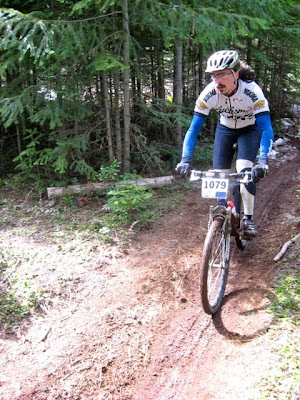 w/switchbacks, dirt roads, etc... To me the race was about pacing myself and putting out a sustained effort over 3-4 hours. Try to recover on the downhills, and hope the legs hold out for the uphills. And keep my focus on not crashing and not bonking. Will raced as well and we got to hang out before the race a bit.
Fergus 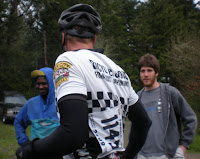 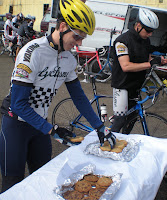 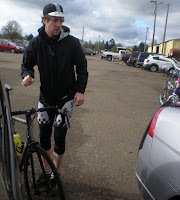 Rural Kings Valley is little more than a store with not much inventory nestled in a low spot near the rollers just before the foothills on the west side of the huge Willamette Valley near Dallas Oregon.

Leaving town early, around 7:30 we sped down I-5 to arrive at a small closed down pollution factory quaintly lodged next to a collection pond framed in a panoramic sea of agrarian bliss. Animal life did not trouble this pond with their animalian antics.

Parking near western shore of the little collection pond we saw instead the bike racers who ventured from the parking lot to find a more rugged place to pee. We attempted to sell them cookies as they passed.

Our little parking area near the pond was off to the side, but also the area of choice for Kenji Sugahara, head of OBRA.

A guest supporter of Cyclisme, Evan Young brought cookies made by Walker (see) http://thefixedgears.blogspot.com/2009/04/whos-walker-anyway.html
First to arrive Stephen Bedford was fired up to be in his first race with Fours, and with his venerable "Fours Flattner" Alex Lightman.
Alex was eventually there too, as Dave Wingard carefully carried a crew of Alex, and Aubery.

Aubery just came to watch, and brought a fixed gear to do it, but went back to sleep as soon as they arrived.

Meanwhile, quick to his work, Lightman went about warming up as he arrived all but arrived dressed. A half an hour later Randy arrived and Dave returned from registration.

Randy had been up til 3:00am celebrating his now 13year old son Ethan's
birthday.
"I had to stay up late on such an important birthday," said Word.

Also a note on Ethan Word is I had a solemn face to face conversation with him last week, and he declared he would like to join the Junior's squad.

Meanwhile, back at race side, all the Cyclisme racers were soon dressed and listening for their start whistle. Wingard rolled on rollers while Alex clamped on a stationary thing.

Upon roll out Wingard, Lightman, and Bedford were near the front of the 4/5s. As the race progressed over many hills and dells Bedford and Lightman tightened up as a tandem survival squad.

Meanwhile, fighting for his life Dave W. fell off the back and fought his way back on a few times. He always led the way with the pursuit groups he was in and found his way back on again and again.

"Stephen did a great job. Domestique extraordinare!" said Alex after the race. "Pace got hot, and we would let each other in."

Alex finished 6th just off the sprint for second behind the solo break a hundred yards up. Bedford was in the pack behind, and Dave had a flat but came rolling up soon.

Randy finished in the pack, but recognized he didn't have great legs today.
Posted by kidsofbike at 5:20 PM 1 comment:

It's About The Climbs pt 2 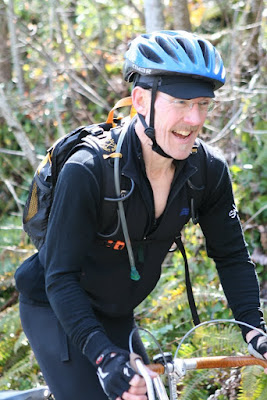 OK, I missed the photos of me and Mike Mann. Photo of me by Mike Mann, photo credits for the rest of the guys goes to Dave Roth. 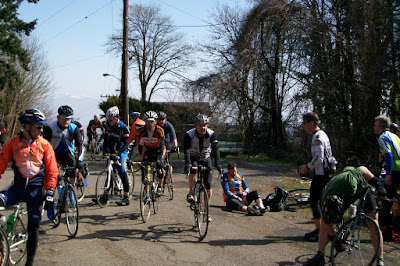 Posted by kidsofbike at 8:34 PM No comments:

It's About The Climbs 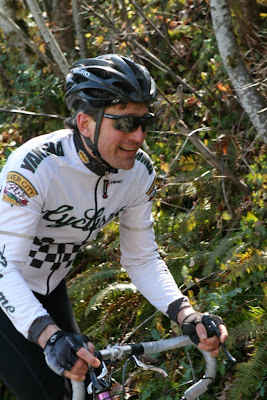 A motley Cyclisme Word-RCB crew hit the De Ronde van Oeste Portlandia last Saturday. The photos tell part of the tale. Jeff grimaced at the front of our group on the 22% College Ave climb, Mike Mann smiled-wanting more, Dave went MTB on us-and spun happily up the steeps, Stephen did the Madone justice and killed the climbs, John E chanted the "we will not walk" mantra up Brynwood. 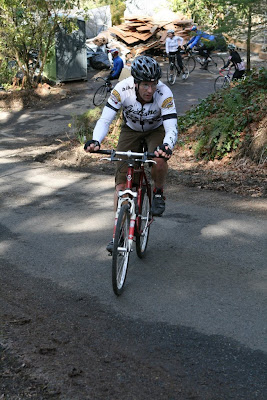 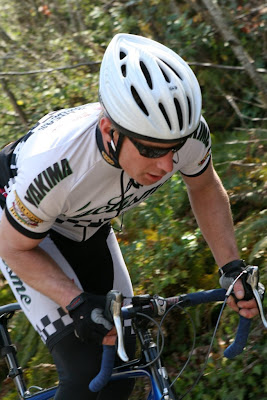 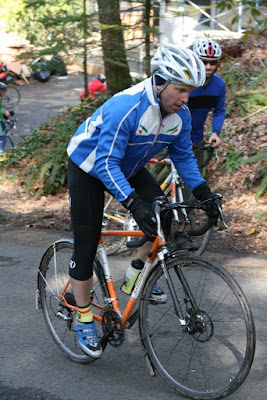 Posted by kidsofbike at 8:07 PM No comments:

Please send out healing thoughts to teammates John Ebenal and Jake Hansen, who both went down in separate unrelated crashes yesterday.

John was hit by a pick-up truck that turned directly in front of him while he was the lead rider in a group descending SW 16th during yesterdays Ronde. John suffered multiple fractures and was taken the to Emanuel trauma center. No head or neck injuries is the good news, but a bad leg break that requires surgery, along with rib and vertebrae fractures. Jeff and Stephen were directly behind John and were lucky to avoid injury themselves. John has a brand new baby boy, which makes this a particular difficult time for he and his family.

I don't have any details of Jake's injury other than a broken collarbone.

"Friends, in light of the injuries of my pals John Ebenal and Jake Hansen I find myself unmotivated to coach a team ride tomorrow. It is OK for you to ride hard, or to sit and mourn.

Recognize the significance of these injuries in your own way. Then in the days to come, I hope we will work together to support these injured guys with meals and chores as they heal.

JB"
Posted by kidsofbike at 9:54 AM No comments: