Jeff, Fergus and I left SE portland at 8:30 headed to Syncline for some quality mountain bike time. The rain and gray skies were not too encouraging out 84, but my hope for blue skies came through by the time we reached Hood River. We pulled into the parking area to glorious spring weather.

Embrocation was applied, clothing adjusted, tire pressure dialed in, food packed, and we were off. Fergus worked the hardest on the lengthy climb due to his single speed 29er. Jeff flew up the hill looking good. We crossed creeks, then started feeling the first traces of rain. 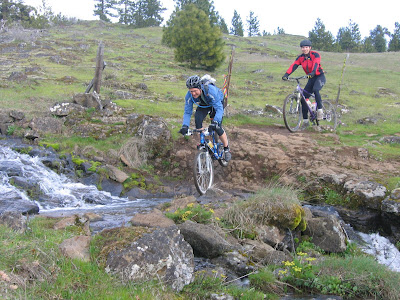 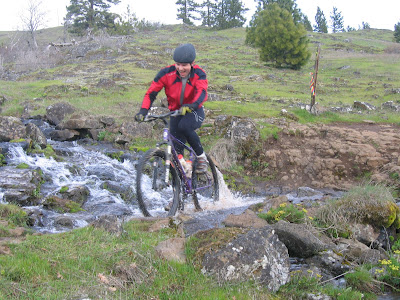 After some more uphill, we reached the top of Little Moab and cautiously approached the edge of the Syncline cliff. Pretty scary, so we got back on the bikes and proceeded up the jeep trail. We finally saw another rider, a woman climbing up towards where we thought we wanted to go. We followed, but never caught up to her. She finally turned back down from a gate and approached us. She explained that there are new signs (no trespassing) being posted on gates that never were signed before. This is part of the trail conflict and upcoming changes that will happen. I explained where we were trying to go (Coyote, although I didn't know the name). She gave us rough directions, we followed her up a short steep trail climb, then she disappeared.

We proceeded up and up, into gale force winds, horizontal hail, and eventually light snow. After a little while I was convinced we were on the right track to get to the Coyote trail I went on 3 years prior with C. Sautter.

The next step was finding the sweet ribbon of singletrack that headed downhill. Once we found it, we celebrated with another photo. 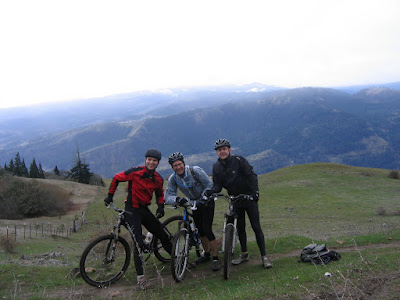 Now it was time for a bomber fun downhill. Fergus called it the "best downhill I've ever ridden". It's alternately fast, rock gardeny, twisty, swoopy, rolling. Minor mishaps included a rather dramatic Fergus crash that sent him a little ways down a steep hillside, and a comical low speed crash in which I somehow landed on top of my bike.

We got back the car; tired, hungry, and very satisfied from an awesome day on the trails. Ride them before they are gone!

Saturday was the inaugural Cylisme MTB 101 ride with the juniors in Forest Park. DeyShaun and I arrived a few minutes early to the Thurman Gate of Forest Park. Unfortunately Marquel was ill and wasn't able to make it. After getting DeyShaun fitted on the yellow hardtail, Will Cortez and John Ebenal showed up. A short while later Fergus, Naiqwan and Aubrey arrived.

We tooled up Leif Erikson and Saltzman with a few brief stops for food, mechanical adjustments and sight seeing. We were in high spirits, with lots of laughing, and garnering smiles and kind words from the walkers and runners we passed. Will and Fergus and John provided quality mentoring and leadership among our three novice mountain bike riders. 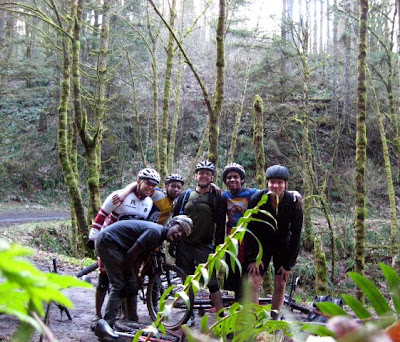 At the top of Saltzman, we entered the singletrack that leads to FL 5. John had to turn towards home, while the rest of us went down the fun stuff. The smiles from Aubrey, DeyShaun and Naiqwan made this one of my best mountain bike days ever. It's truly wonderful to share the sport with newcomers, especially 13 and 14 year olds like the Cyclisme juniors. DeyShaun, Aubrey and Naiqwan all showed tremendous potential as future MTB racers. Naiqwan set a rigorous pace up Saltzman, and the three descended much faster than I expected them to (I kept DeyShaun and Naiqwan behind me to control any chaos).

Naiqwan took a little tumble on the muddy fire road descent, and DeyShaun took on on the FL5 singletrack. No harm was done, and we proceeded on. Naiqwan's bike had an issue with shifting which took out the chain and a few spokes, so he got the old Cyclisme push for the final 6 miles back to the cars.


This was outstanding fun for everyone, and I'm looking forward to our next MTB 101 in the next couple of weeks.

Greg
Posted by kidsofbike at 8:15 PM No comments: 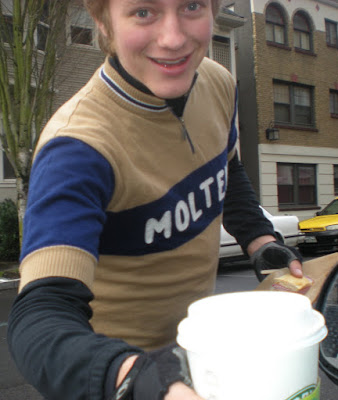 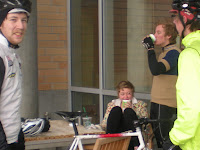 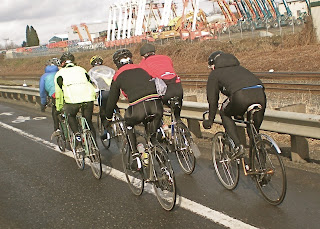 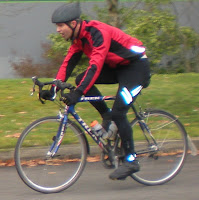 Arriving at 9am
and that is 8am to all you daylight savers, 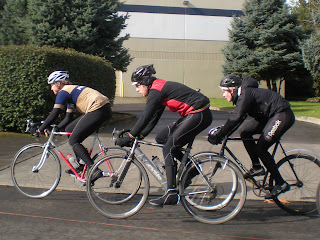 COFFEE was the order of the morning. And nobody knows how to impress a squinty eyed early morning Directeur Sportif like Dishes does.
Thank You Dishes, and everyone who kicked down coaching fees for this grass roots speed doctor.
It warms my heart.
And something had better be warm, because the freezing level was below 500 feet. Maybe 300.
We warmed up on the Alameda ridge, up and down, up and down, and there was snow up there!
After a run about NoPo it was time to get down... to Swan Island where the blocking games began. In the second week of firing up for Cyclisme Pride most of the team celebrated in bed, but with five guys we chased imaginary attackers.
When Dave Wingard showed up we all cheered.
Randy and Alex can block like freeks, but dave, dishes and fergus are no slouches either. Stay tuned for real strategies bicycle teamsters.
Posted by kidsofbike at 7:42 PM No comments: 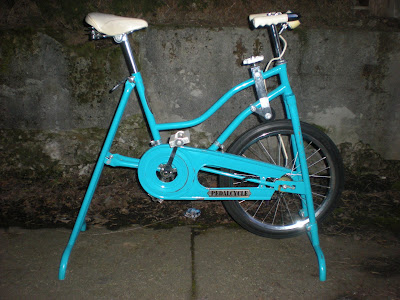 In a big sponsorship deal, today PEDALCYCLE announced they would be sponsoring the young team in the upcoming 2009 campaign.
"Yeah they don't move, but bicycle racing is not just about the bike," reminded team captain,  Randy Word.
"I am just glad to see we have some solid sponsorship," said the team Directeur Sportif, Giovani Benenate.
Posted by kidsofbike at 7:32 PM 2 comments:

Echelons on top, Sprints on the circle. 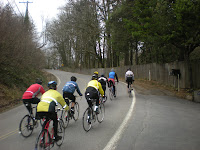 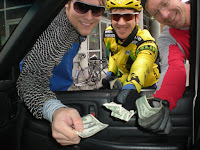 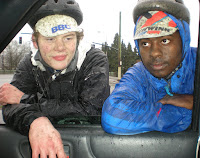 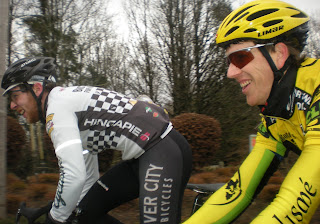 Skyline ridge to Swan Island was the circuitous route from PSU up Terwilliger, across to Sylvan and down Germantown.
"It felt like Rocky Rabbit until we turned right on Germantown," said Randy.
But then after a quick descent it was an easy run across the Willamette Bluff.
It was good to see Jeff Gerwing who rode well, but conservatively. It did not escape the veteran hill climber and road cat 3 that the team had improved a lot, and was flying this day.
Before the event, everyone was very generous as not only some great recruiting been going on discovering the young fixies Duff, and Edwards, but some clever games were going to be revealed from the Benenate repertoire down on Swan Island.
On the way out THE LIGHT man, and THE WORD were incorrigible and the blazer had to be dispatched for discipline, But everyone was so strong behind, that we were never apart for long.
On the climb up  Alex and Bedford demonstrated leadership  by standing up in granny gears for a long spell.  They looked fast.
Posted by kidsofbike at 6:27 PM No comments:

Bustin it on the Bluff

It just kept getting easier and easier.
After so many rides up on Skyline that seemed to get harder and harder as they progressed, this one seemed easy. By the time they came down off of skyline and hit the east side, the tempo was brisk.
Noticeably fast throughout the day, no one seemed to mind as this ride left the grueling hills and landed in the flat land.
"They are faster aren't they Dave?" I stated to Wingard.
"Yeah impressive!" he  laughed as he said it, but didn't look up from the wheel flying just ahead.
Maybe it was also the added wattage of Timmy Evens visiting from Bend, and towing here at the front.
Posted by kidsofbike at 6:14 PM No comments:

Swan Island
Cutters Circle
was the destination
after we rode down on Germantown Road.
Flying down through
St. Johns,
we took Willamette Blvd.
Timmy Evans, a big dog visiting from Bend powered our progress.
Posted by kidsofbike at 4:37 PM No comments: