The Road to his first Nationals 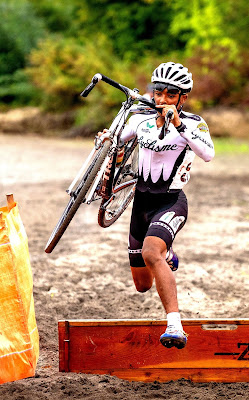 When Mateen Richey
was a child,
we marveled
at his ability to stay motivated
and keep his bicycle upright in chaos.
Kids on Bikes activities at Blazer Boys and Girls Club put cyclists all around him and in his way.
His goal was to not to dap (put his foot down.)
As an 8 year old, he was a master. (see 8 yr old here)

Mateen always rode his bicycle in silence, and with a smile.

Unfortunately, we lost track of him for a spell. A few years.
Chaos had been no stranger in his young life.

A cacophonous parental divorce charged the tenor of his upbringing. Young parents in poverty were challenged to despair.
Everyone in Mateen's family love him and help him. They all want the best for this young star. 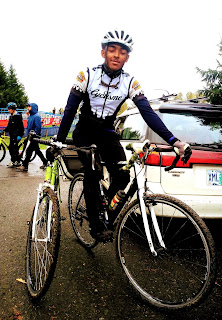 Luckily, his grandfather had an extra room in his house and $20 in his pocket to go get some dinner at Taco Bell. It was time of rest and recovery. As well as gentle recovery in an intellectual setting.


Grandpa's level of support allowed Mateen to attend his first year of HS at about 75% consistency, and periodic school security escorts to the principle's office.
This time in life allowed Mateen to nearly live at the Mt. Scott Community Center, playing basketball.


Swimming is a big part of Bicycles and Ideas for Kids' Empowerment, and on one of trips to the pool, we spotted Mateen. We swam at Mt. Scott Pool where he played pick-up basketball.
Now over five feet tall, Mateen was attending high school in his Freshman year.  Miraculously in this same week, one of b.i.k.e.'s most famous volunteers met Mateen's Math Teacher in a bar.


b.i.k.e. was given the private cell number of the very teacher who had to call the school security. When I called and introduced myself, we only spoke of general programming ideas at first. But soon, I revealed I had a kid in our program that might be in his class. When I said the child's name the math teacher gasped with astonishment. This was one of the kids he had been having the trouble with.

Next thing you knew, we were all out to dinner sharing a meal. (see here)
One thing led to another, and a Stanford Phd. Mathematician named Study Buddy J got on Skype with Mateen. With a Math tutor, Mateen was transformed. His math class under the watchful eye of his math teacher, became a study skills laboratory. Improvement in math study skills steadily transformed Mateen's approach to his entire class load. Last term Mateen received a 3.5 gpa.

Mateen has been thinking lately he might study to become a CPA like his brother in The Lore of Cyclisme, Stephen Bedford.

December 15th in Lakewood Washington, Mateen will race in his first NATIONALS.
USA CYCLOCROSS NATIONALS in the ELITE JUNIOR 17-18 Division.
Watch the live feed at 8:15AM (here) and  https://bike.shimano.com/en-US/information/news/2019-usa-cycling-cyclocross-nationals-live-stream.html

Posted by kidsofbike at 12:07 PM No comments: